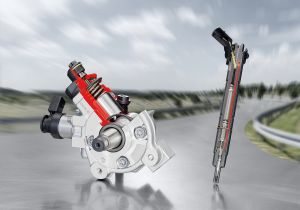 Injection pumps and injectors, such as the Bosch Common Rail System CRS3-25, generate pressures of 2500 bars thanks to hardened steel. (Source: Bosch)

Scientists of Karlsruhe Institute of Technology (KIT) are working on the development of a new process for hardening steel: With the help of methylamine, they enrich low-alloy steels with carbon and nitrogen. Low-pressure carbonitration with methylamine saves time and process gas. The steels hardened in this way are suited for use in components subjected to high mechanical and thermal loads in energy-efficient and low-emission engines of the future. The researchers present their process in the HTM - Journal of Heat Treatment and Materials.

Combustion engines still have much potential to save energy and reduce emissions. The present trend is to use smaller engines of the same or even increased power. Engines with a reduced cylinder capacity consume less fuel due to their smaller weight, smaller friction, and smaller amount of exhaust heat. This so-called downsizing, however, is associated with even higher mechanical and thermal loads acting on the already highly loaded components of diesel injection systems, for instance. Diesel injection systems have to reach higher injection pressures and improved injection accuracies in order to meet the requirements of downsizing. Hence, injection nozzles have to be made of highly stable materials.

An attractive and inexpensive option is the use of low-alloy steels, i.e. types of steel containing not more than five mass percent of metals other than iron. Such steels can be machined well in the soft state and are then hardened for use. A hard surface with a tough core is obtained. Scientists of KIT’s Engler-Bunte Institute are now working on a new process for the case-hardening of steel, namely, low-pressure carbonitration: At temperatures between 800 and 1050°C and total pressures below 50 millibars, the surface of the components to be hardened is specifically enriched with carbon and nitrogen and subsequently hardened by quenching. The project headed by David Koch is aimed at studying the fundamentals of low-pressure carbonitration and developing this process to maturity in cooperation with research and industry partners. “Low-pressure carbonitration combines the advantages of low-pressure processes with those of atmospheric carbonitration,” David Koch explains. Atmospheric carbonitration damages the surface of the components treated by oxidation. This can be prevented by low-pressure processes. In addition, a more homogeneous hardness profile is generated in the component, in particular in case of complex component geometries.

So far, low-pressure carbonitration has been carried out nearly exclusively using ammonia as a nitrogen donor together with a carbon donor, i.e. ethyne or propane. The KIT scientists have now studied other gases and gas mixtures for suitability for low-pressure carbonitration. Their efficiency in enriching the surface layer with carbon and nitrogen was tested using a thermobalance. Together with researchers of Robert Bosch GmbH, Stuttgart, they found that methylamine (CH3NH2) and dimethylamine ((CH3)2NH) process gases cause a good enrichment of the surface layer with carbon and nitrogen. The results obtained for low-pressure carbonitration with methylamine are now presented in the HTM – Journal of Heat Treatment and Materials.

When using methylamine for low-pressure carbonitration, only one gas instead of two is required and the usually applied two process steps can be reduced to a single one. Compared to the use of ammonia as nitrogen donor together with a carbon donor, methylamine alone reaches a higher nitrogen enrichment in the surface layer. As carbon enters the surface layer in parallel, the process duration is shortened considerably. Methylamine also allows for carbonitration at much higher temperatures, which additionally shortens the process duration. Moreover, the degree of utilization of methylamine as a process gas is better, as a result of which the amount of gas used can be reduced.

The KIT scientists are now working on further optimizing low-pressure carbonitration with amines. Work focuses in particular on improving the homogeneity and free adjustment of carbon and nitrogen input. The next goal is to transfer the process from the laboratory to the pilot scale.