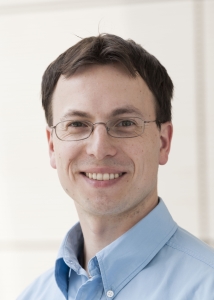 The chemist Dr. Pavel Levkin of Karlsruhe Institute of Technology (KIT) is granted the 2015 Heinz Maier-Leibnitz Prize by the German Research Foundation (DFG). The prize is considered the highest distinction for young researchers in Germany. Scientific work of Pavel Levkin focuses on the investigation of cell-surface interactions, the development of biofunctional materials and super-water-repellent surfaces as well as on nanoparticles for specific medicine and gene transport. A major scientific success of Levkin was the synthesis of lipid-like molecules for gene modification of cells.

“Polymer chemistry develops new synthesis methods for innovative materials with so far unreached properties and has a high potential for future use,” KIT President Professor Holger Hanselka explains. “An important application is molecular cell biology. Based on his excellent understanding of polymer chemistry and biology, Pavel Levkin made major contributions. I am extraordinarily happy that this great achievement is now honored by the important Heinz Maier-Leibnitz Prize.”

The Heinz Maier-Leibnitz Prize is granted annually by the DFG to young scientists for outstanding achievements. The prize does not only account for the doctoral thesis, but also considers the fact that the winners have already developed a scientific standing of their own after their doctorate. The distinction is to provide an incentive for the scientists to continue their scientific career. Ten prizes in the amount of EUR 20.000 each are granted. The funds are made available by the Federal Ministry of Education and Research (BMBF). According to a survey of the journal “Bild der Wissenschaft”, the big research organizations consider the Heinz Maier-Leibnitz Prize the third important science award in Germany, after the Gottfried Wilhelm Leibniz Prize of the DFG and the Deutscher Zukunftspreis, the German President’s Award for Innovation in Science and Technology. On May 05, the Heinz Maier-Leibnitz Prizes will be handed over officially in Berlin.

Research of Pavel Levkin covers the interface of polymer research, micro-engineering, and biologico-medical applications. He uses his profound knowledge of chemical applications to find new solutions of biological problems. The so far biggest scientific success of Dr. Pavel Levkin was the development of super-water-repellent polymer surfaces, which are now applied for miniaturized cell experiments. Levkin’s research team at KIT works on strategies of modifying surfaces that are in contact with cells as well as on the development of new nanoparticles for specific medicine and gene transport. Meanwhile, renowned molecular cell biologists have used Levkin’s systems. Based on his work, a spinoff, Incella GmbH, was established.