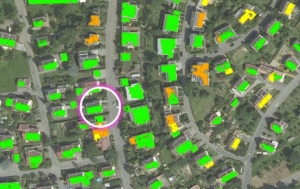 Recently, Google started the Sunroof project, a service that calculates potential energy savings of home owners due to solar facilities on their roofs. However, this project covers a few cities in the USA only. Scientists of Karlsruhe Institute of Technology (KIT) and European partners have now finished the EAGLESolar research project. It covers the same activities in European cities and take into account local conditions. Among the test regions is Karlsruhe with its districts of Knielingen and Nordweststadt.

As a result of decreasing costs of solar thermal and photovoltaic systems, every house owner can produce electricity or heat on his own in principle. Often, an energy consultant is needed to decide to what an extent the house roof is suited for installation of photovoltaic systems and whether they are worthwhile. Under the EAGLESolar project funded by the European Union with EUR 2.4 million, scientists of KIT determined the suitability of roofs with so far unreached precision.

In a first step, the project partners provide high-resolution aerial photos or laser scanning data of various cities in Europe, including municipalities near Karlsruhe. The scientists of the KIT Institute of Photogrammetry and Remote Sensing (IPF) then used these photos to generate three-dimensional maps similar to Google Maps, but with a much higher resolution up to 10 cm or better. This high precision of the maps was required for the researchers to develop an algorithm to calculate potential suitability of roof areas for the installation of solar facilities. The more precise the model is, the better is automatic analysis of roof areas usable for solar facilities and the closer are the calculations to reality.

Calculation of the potential of a roof is based on static data, such as the roof area available, orientation of the roof, and its inclination. In addition, variable data, such as areas shaded by other houses, trees, stacks, or dormers and reducing the efficiency of solar facilities, are considered. Determination of shaded areas is complex, as the sun casts variable shades depending on the time of day and season. Consequently, analysis has to consider all angles of incidence of solar radiation throughout the year.

To calculate these huge data volumes arising from the precision of the 3D maps and the sun’s course, the project partners for the first time used supercomputers. “Processing these data volumes with conventional computers simply is not time- or cost-efficient. Together with our project partners, including supercomputing centers, we redesigned workflows to obtain effective results by parallel computing,” Stefan Hinz, Head of the Institute of Photogrammetry and Remote Sensing, says. On conventional PCs, calculations are divided into small packages and executed successively. When using supercomputers, these packages are calculated at the same time, i.e. in parallel, which produces the results significantly faster.

The project partners combined these data on the suitability of roofs with regional weather data, such as average cloud density or number of sunshine hours, to prognosticate the expected power and heat production. Finally, automatic comparison with daily tariffs and funding options yields potential financial savings.

On the website www.eaglesolar.eu, inhabitants of e.g. Knielingen and Nordweststadt can register at “Anmelden” and directly access the available roof analyses in the English language. A video presents the portal at:

The system developed can be extended to cover entire Europe. A video on YouTube explains the project (in the English language):