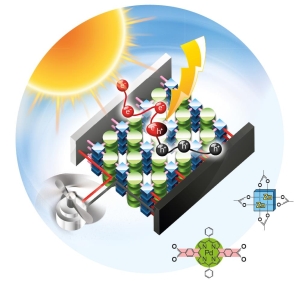 Researchers at KIT have developed a material suited for photo-voltaics. For the first time, a functioning organic solar cell con-sisting of a single component has been produced on the basis of metal-organic framework compounds (MOFs). The material is highly elastic and might also be used for the flexible coating of clothes and deformable components. This development success is presented on the front page of the journal Angewandte Chemie International Edition.

“We have opened the door to a new room,” says Professor Christof Wöll, Director of KIT Institute of Functional Interfaces (IFG). “This new application of metal-organic framework compounds is the be-ginning only. The end of this development line is far from being reached,” the physicist emphasizes.

Metal-organic frameworks, briefly called MOFs, consist of two basic elements, metal node points and organic molecules, which are assembled to form microporous, crystalline materials. For about a decade, MOFs have been attracting considerable interest of re-searchers, because their functionality can be adjusted by varying the components. “A number of properties of the material can be changed,” Wöll explains. So far, more than 20,000 different MOF types have been developed and used mostly for the storage or separation of gases.

The team of scientists under the direction of KIT has now produced MOFs based on porphyrines. These porphyrine-based MOFs have highly interesting photophysical properties: Apart from a high effi-ciency in producing charge carriers, a high mobility of the latter is observed. Computations made by the group of Professor Thomas Heine from Jacobs University Bremen, which is also involved in the project, suggest that the excellent properties of the solar cell result from an additional mechanism – the formation of indirect band gaps – that plays an important role in photovoltaics. Nature uses porphy-rines as universal molecules e.g. in hemoglobin and chlorophyll, where these organic dyes convert light into chemical energy. A met-al-organic solar cell produced on the basis of this novel porphyrine-MOF is now presented by the researchers in the journal Angewandte Chemie (Applied Chemistry). The contribution is entitled “Photoinduzierte Erzeugung von Ladungsträgern in epitaktischen MOF-Dünnschichten: hohe Leistung aufgrund einer indirekten elekt-ronischen Bandlücke?“ (photo-induced generation of charge carriers in epitactic MOF-thin layers: high efficiency resulting from an indirect electronic band gap?).

“The clou is that we just need a single organic molecule in the solar cell,” Wöll says. The researchers expect that the photovoltaic capac-ity of the material may be increased considerably in the future by filling the pores in the crystalline lattice structure with molecules that can release and take up electric charges.

By means of a process developed at KIT, the crystalline frameworks grow in layers on a transparent, conductive carrier surface and form a homogeneous thin film, so-called SURMOFs. “The SURMOF process is suited in principle for a continuous manufacturing process and also allows for the coating of larger plastic carrier surfaces,” Wöll says. Thanks to their mechanical properties, MOF thin films of a few hundred nanometers in thickness can be used for flexible solar cells or for the coating of clothing material or deformable components. While the demand for technical systems converting sunlight into electricity is increasing, organic materials represent a highly interesting alternative to silicon that has to be processed at high costs before it can be used for the photoactive layer of a solar cell.