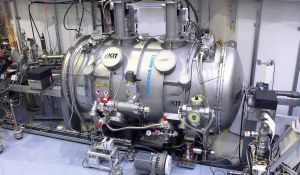 SCU15 is a unique superconducting undulator for production of high-brilliance x-rays installed in the ANKA storage ring (Image: KIT/ANKA/BNG)

Synchrotron radiation facilities provide insights into the world of very small structures like microbes, viruses or nanomaterials and rely on dedicated magnet technology, which is optimized to produce highest intensity beams. The ANKA synchrotron radiation facility at KIT and Babcock Noell GmbH now took a technological leap forward: They have successfully developed, installed, and tested a novel full-length superconducting undulator, for the first time providing higher peak magnetic fields for the production of x-rays than traditional permanent-magnet undulators currently in use in facilities around the world.

Synchrotron radiation is one of the most intense sources of x-rays and infrared radiation, and is a powerful tool for research in both industry and academia. It provides unique insights into the world of biology, medicine, chemistry and physics, and equips industrial researchers with non-destructive means of analysing materials or components of future devices and machines.

The ANKA synchrotron radiation facility at the Karlsruhe Institute of Technology (KIT) and its industrial partner Babcock Noell GmbH (BNG) have successfully developed, installed, and tested a novel superconducting undulator in the ANKA storage ring during the 2014/2015 winter shutdown.

The new full-length, high-performance superconducting undulator, named „SCU15“, is a 1.5 meter long device that forces electrons on an undulating path, using a periodic magnetic field with 100 periods of 15 millimeters each. “The installation and reliable operation of the SCU15 is a major milestone in a long-term research & development program devoted to next-generation insertion devices, and it is a significant breakthrough in superconducting insertion device design”, states Dr. Sara Casalbuoni, head of the insertion device research group at ANKA. Cristian Boffo, head of the development department in magnet technologies at BNG, adds: “Novel technological approaches implemented in the design of SCU15 have led to a successful completion of the first milestone in our KIT-BNG collaboration, making the SCU15 a world-wide unique device”. The joint development was supported through funding by the Helmholtz Association, enabling ANKA to conduct a multi-year research and development program in the area of superconducting insertion devices.

An undulator is an array of dipole magnets with alternating magnetic field direction, which forces the beam of high-energy electrons onto an “undulating” path, leading to the emission of intense and highly collimated electromagnetic radiation. In contrast to common undulators that use permanent magnets, SCU15 uses superconducting electromagnets, relying on the ability of some materials at very low temperatures to conduct extremely high electrical currents with zero resistance. The high currents allow creating high magnetic fields inside the device. Thanks to high-precision components, SCU15 fulfills stringent demands on the accuracy of the magnetic field. This makes SCU15 the first full-length superconducting device to reach higher peak magnetic fields than comparable cryogenic permanent magnet undulators.

The development of superconducting undulators started in Karlsruhe in the early 1990s and KIT holds several patents applicable to superconducting undulator technology (e.g., H. O. Moser, B. Krevet, and H. Holzapfel (1991), Patent DE 4101094 C1). As early as 2005, a first superconducting undulator demonstrator with 14 mm period length and 100 periods (developed in collaboration with Accel GmbH) was installed and operated in the ANKA storage ring. Valuable lessons were learned from this demonstrator device. In particular, it was observed that the heat load generated by the electron beam resulted in a limited peak magnetic field, smaller than the one reachable by permanent magnet undulators. Thanks to the lessons learned by ANKA and the extensive experience of BNG in designing and fabricating conduction cooled systems e.g. a solenoid system operating successfully at the Spallation Neutron Source (SNS) at the U.S. Oak Ridge National Lab, a new design was implemented in SCU15 to overcome this barrier.

As Prof. Anke-Susanne Müller, one of the three directors of ANKA and head of the accelerator research activities at KIT, points out: “With future devices on the drawing board, the encouraging results obtained with the SCU15 at ANKA paint a bright picture for the future implementation of SCU devices in current synchrotron radiation facilities and the next generation of low-emittance light sources”.

Babcock Noell GmbH (BNG) is a company of Bilfinger Power Systems GmbH. Operating worldwide in the product areas of nuclear service, nuclear technology, magnet technology and environment technology, Babcock Noell delivers experience into practice with great success. Services range from developing, planning, delivering, and commissioning up to operating the delivered plants and the relevant equipment. The majority of the 350 employees work in the field of engineering.