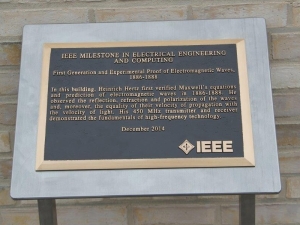 The IEEE Milestone “Heinrich Hertz“ will be set up on the Ehrenhof, KIT Campus South, where the laboratory of Heinrich Hertz was located. (Photo: Alexander Stahl, KIT)

The Karlsruhe Institute of Technology (KIT) receives the
IEEE Milestone “Heinrich Hertz“ of the Institute of Electrical and Electronics Engineers (IEEE). The renowned worldwide association of electrical and electronics engineers wishes to honor the physicist Heinrich Hertz (1857 – 1894) and his discovery of electromagnetic waves in Karlsruhe in 1886. Representatives of the media are cordially invited to come to the ceremony and unveiling of the IEEE Milestone on Friday, December 05, 2014, 10 hrs c.t. at the Hertz-Hörsaal on KIT Campus South.

The “IEEE Milestones Program” has been established by the IEEE to honor important and outstanding discoveries and inventions in the areas of electrical engineering and information technology. The IEEE Milestone “Heinrich Hertz” is a bronze plaque of 45 x 30 x 2 cm in dimension. This bronze plaque will be put up on KIT Campus South on the Ehrenhof, where the former laboratory of Heinrich Hertz was located. Between 1885 and 1889, the physicist conducted research and taught at the then Technical University of Karlsruhe. In 1886, he discovered the electromagnetic waves, a physical effect that turned out to be the basis of wireless communication later on.

“Heinrich Hertz was an outstanding researcher. His work gave rise to a scientific and technical revolution,” says KIT Vice President Professor Detlef Löhe. “We are proud of having him among the ancestors of KIT as an ideal for generations of scientists and we are highly pleased to receive this permanent sign of commemoration of his work in Karlsruhe.”

“It was the discovery of Hertz that later led to the radio, television, telecommunications, and WLAN – applications that are part of our everyday life today. The discovery of Hertz is one of the major milestones in the history of electrical engineering and information technology,” says Professor Thomas Leibfried, Head of the KIT Institute of Electric Energy Systems and High-Voltage Engineering (IEH).

The “IEEE Milestones in Electrical Engineering and Computing“ of the IEEE History Committee honors products, services, work, and patents that turned out to be pioneer innovations and achievements for the benefit of mankind. The commemorated event has to date back 25 years at least. So far, the IEEE has granted more than 100 milestones worldwide. In 2013, the IEEE, the world’s professional association of electrical and electronic engineers with the office in New York City had more than 425,000 members in more than 160 countries and, hence, is the world’s largest professional association. The IEEE organizes conferences, issues journals, and establishes committees for the standardization of technologies, hardware, and software. In addition, the IEEE supports interdisciplinary information exchange and discussion of the impacts of new technologies on society.

Welcome and Opening of the Ceremony
Professor Thomas Leibfried, Dean of the Department of
Electrical Engineering and Information Technology, KIT