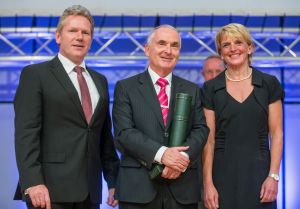 Professor Georg Bretthauer, Karlsruhe Institute of Technology (KIT), receives the VDE Ring of Honor, the highest award granted for merits in research and development. The VDE honors Bretthauer’s extraordinary commitment to measurement and automation technology. At the KIT, the engineer and computer scientist among others developed an artificial accommodation system: Artificial lenses inserted in case of diseases, such as cataract, are to automatically focus objects at variable distances. The results are now incorporated in the current project on an intelligent contact lens.

Professor Georg Bretthauer heads the KIT Institute of Applied Computer Science / Automation (AIA) and is Member of the Board of the Institute of Applied Computer Science (IAI). His research work focuses on mechatronics and biomechanics, learning systems, modeling, simulation, and optimization as well as on methods, processes, and tools enabling complex perceptions by technical systems. His central concern is the application of theoretical findings in industrial practice.

His research results in medical engineering have met with high international recognition. Apart from the artificial accommodation system, Bretthauer also developed and tested an adaptive nerve prosthesis for the regeneration of nerve lesions. Nerve lesions are injuries or malfunctions caused by traffic, work, and sports accidents or by burns, stitch damage, and tumors. A few years ago, the researchers for the first time succeeded in regenerating nerve ends separated by eight millimeters using the nerve prosthesis. Within the framework of such research projects, Georg Bretthauer interdisciplinarily cooperates with physicians and scientists of the universities of Rostock and Graz. Bretthauer was the only non-physician so far, who received the Honorary Doctorate of the Medical University of Graz for his achievements in the area of university development and cooperation of steering bodies. Moreover, Bretthauer, as a young researcher, already worked on identifying multi-parameter systems and large hierarchically structured systems and focused on the calculation of reliability and maintenance planning of large energy networks and, thus, contributed to the further development of the theory of large technical systems.

About the Person
Professor Georg Bretthauer completed his diploma in electrical engineering at the Technical University of Dresden in 1970. In 1977, he was awarded his doctorate in control technology. He obtained his postdoctoral lecture qualification in automation technology in 1983, also at TU Dresden. After a professorship for control technology at the TU Bergakademie Freiberg, Georg Bretthauer was appointed professor and Head of the Institute of Applied Computer Science / Automation Technology at the then University of Karlsruhe and Head of the Institute of Applied Computer Science of the then Forschungszentrum Karlsruhe in 1997. Far before the establishment of the KIT, was he active at both precursory institutions. Among his scientific awards are the Honorary Professorship of the Beijing Institute of Technology (BIT) as well as the Honorary Doctorates of the Otto von Guericke University of Madgeburg and the Medical University of Graz. In addition, he was awarded the Order of Merit of the VDI and the Otto Winkler Medal of Honor of the VDI/VDE Society for Measurement and Automation Technology (GMA). Georg Bretthauer was and is active in a number of national and international associations and expert bodies.