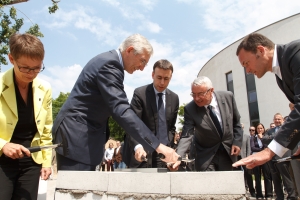 New materials for energy storage and energy conversion will be in the focus of research conducted at the Materials Science Center for Energy Systems (MZE) that will be built on KIT Campus South. Today, the foundation stone ceremony took place in the presence of the Baden-Württemberg Minister of Finance and Economics Dr. Nils Schmid. The building costs of EUR 27.4 million will be shared equally between the Federal Republic of Germany and the state of Baden-Württemberg. The funds have been granted under a competition launched by the State Ministry of Science, Research, and the Arts to establish materials science centers in Baden-Württemberg. At the same time, the Microtribology Center of the Fraunhofer Society is being built in the vicinity. It will study scientific aspects of friction and wear processes.

“We do not only lay the foundation stone for a new building, but also for a closer cooperation between research and industry in the Southwest. For the state government, this new building is an investment into the future of this leading state of innovation in Europe. Baden-Württemberg is to be enabled to continue its innovation tradition in the future,” said the Minister of Finance and Economics, Nils Schmid, during the ceremony. The event was organized by the Karlsruhe Office for Assets and Construction in Baden-Württemberg on behalf of the Ministry of Finance and Economics and the Fraunhofer Society.

“Materials research is one of the major drivers of innovations in many branches and for many applications. The MZE with its focus on energy technology and the specific competence of KIT will contribute significantly to a sustainable economy,” said the Minister of Science, Research, and the Arts of the state of Baden-Württemberg, Theresia Bauer.

“New materials for energy supply, such as rechargeable battery systems and printable solar cells, are major prerequisites for the energy turnaround. The MZE will contribute essentially to their development. For this purpose, scientists of various disciplines cooperate closely at the KIT. We would like to thank the Federation and the State for their support in establishing the Materials Science Center for Energy Systems,” emphasized Professor Holger Hanselka, President of KIT.

The MZE will pool materials science working groups with about 200 employees in total. They focus on process technology, characterization and modeling as well as on the simulation of new materials for energy systems. The new center will allow for an unprecedented highly interdisciplinary cooperation of engineers and scientists. “Research at the MZE will not only cover the development of new materials for energy technology, but also processes, by means of which these materials can be produced efficiently, processed, and integrated into complete systems,” explained Professor Michael J. Hoffmann, Coordinator of the MZE.

The new building with a usable area of about 4200 m2 is being constructed under the supervision of the Karlsruhe Office for Assets and Construction in Baden-Württemberg on the Campus South of KIT in the direct vicinity of the Audimax. The design was made by the architectural office van den Valentyn, Cologne, that won the first prize in a competition in 2011. Room layout is tailored specially to the interdisciplinary work and to foster communication among the working groups and their cooperation. The building is planned to be completed in late 2015. The total project volume is EUR 35.8 million, EUR 27.4 million of which are spent for the new building. This amount is financed at an equal ratio from state funds under the Zukunftsoffensive IV program and from federal supraregional funds to promote research.

At the same time, the Microtribology Center of the Fraunhofer Society is being built near the MZE. Here, the Fraunhofer Institute for Mechanics of Materials IWM, Freiburg, and the KIT Institute for Applied Materials will increasingly concentrate their cooperation in the area of microtribology in the future. Microtribology focuses on friction and wear of components, both of which reduce the lifetimes and adversely affect the economic efficiency and reliability of technical systems. “Location of the Microtribology Center on the premises of KIT Campus South means a big opportunity for both partners to use synergy potentials. This is the basis for pushing the energy turnaround and for providing industry with new materials science solutions,” said Professor Alfred Gossner, Executive Vice President Finance, Controlling and Information Systems of the Fraunhofer-Gesellschaft.