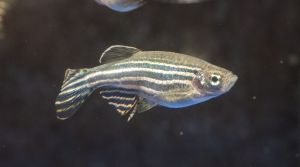 The zebrafish is used as a model organism for research into the embryonic development of vertebrates. (Photo: KIT)

Early embryonic development of vertebrates is controlled by the genes and their “grammar”. Decoding this grammar might help understand the formation of abnormalities or cancer or develop new medical drugs. For the first time, it is now found by a study that various mechanisms of transcribing DNA into RNA exist during gene expression in the different development phases of zebrafish. This study is presented by KIT researchers in the journal “Nature”.

After several genomes have been sequenced and human genetic material has been decoded, many questions regarding the structure and function of genetic information still remain unanswered. On the DNA (deoxyribonucleic acid), the carrier of genetic information, scientists search for the grammar regulating gene expression, for instance. The result of this gene expression is the RNA (ribonucleic acid) that converts genetic information into proteins. A major process of gene expression is transcription, by which RNA is synthesized according to a DNA template. However, it is still unknown where exactly transcription starts and which regularly recurring DNA segments, DNA modifications or structural modifications of the DNA are required to determine the start of transcription. Complete understanding of transcription regulation might allow for specific interference with these mechanisms and the development of new medical drugs against diseases.

An international team of scientists, including Uwe Strähle, Head of the Institute of Toxicology and Genetics (ITG) of KIT, and his staff members Dr. Olivier Amant and Dr. Marco Ferg, studied the processes associated with the start of transcription in zebrafish in more detail. The ITG runs the European Zebrafish Resource Center (EZRC), a central archive for fish cultivation and dissemination and screening center. In genetics, the zebrafish is considered an important model organism for studies of vertebrates. Using the CAGE (Cap Analysis of Gene Expression) high-throughput method, the scientists determined the starting points of transcription of many thousands of genes in various phases of embryonic development of zebrafish.

Comparison of the data revealed that use of certain starting points differs in two phases of embryonic development in particular: Before and after activation of the embryonic genome. “Prior to activation, the growing embryo uses transcripts deposited by the mother in the egg for the production of proteins,” explains Dr. Marco Ferg, ITG. “The genome of the mother acts as a matrix or complementary template. After activation of the embryonic genome, the transcripts are newly produced. Then, the genome of the embryo serves as a matrix.” With the help of so-called next-generation sequencing methods for decoding unknown DNA sequences at high throughputs, the ITG researchers were the first to find out that various transcription mechanisms exist in various development phases.

Further studies are needed to determine whether the specific use of transcription starting points is a widely disseminated mechanism for gene regulation. “If this is the case, it might be possible to control transcription and to specifically counteract diseases like cancer, which are caused by defective transcription,” Marco Ferg says. “However, we are still in the phase of fundamental research.”