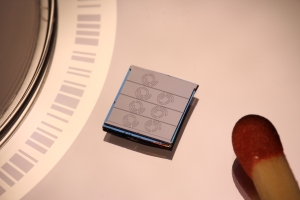 Miniaturized optical frequency comb sources allow for transmission of data streams of several terabits per second over hundreds of kilometers – this has now been demonstrated by researchers of Karlsruhe Institute of Technology (KIT) and the Swiss École Polytechnique Fédérale de Lausanne (EPFL) in a experiment presented in the journal “Nature Photonics”. The results may contribute to accelerating data transmission in large computing centers and worldwide communication networks. (DOI: 10.1038/NPHOTON.2014.57.)

The amount of data generated and transmitted worldwide is growing continuously. With the help of light, data can be transmitted rapidly and efficiently. Optical communication is based on glass fibers, through which optical signals can be transmitted over large distances with hardly any losses. So-called wavelength division multiplexing (WDM) techniques allow for the transmission of several data channels independently of each other on a single optical fiber, thereby enabling extremely high data rates. For this purpose, the information is encoded on laser light of different wavelengths, i.e. different colors. However, scalability of such systems is limited, as presently an individual laser is required for each transmission channel. In addition, it is difficult to stabilize the wavelengths of these lasers, which requires additional spectral guard bands between the data channels to prevent crosstalk.

In the study presented in “Nature Photonics”, the scientists of KIT, together with their EPFL colleagues, applied a miniaturized frequency comb as optical source. They reached a data rate of 1.44 terabits per second and the data was transmitted over a distance of 300 km. This corresponds to a data volume of more than 100 million telephone calls or up to 500 000 high-definition (HD) videos. For the first time, the study shows that miniaturized optical frequency comb sources are suited for coherent data transmission in the terabit range.

Optical frequency combs, for the development of which John Hall and Theodor W. Hänsch received the 2005 Nobel Prize in Physics, consist of many densely spaced spectral lines, the distances of which are identical and exactly known. So far, frequency combs have been used mainly for highly precise optical atomic clocks or optical rulers measuring optical frequencies with utmost precision. However, conventional frequency comb sources are bulky and costly devices and hence not very well suited for use in data transmission. Moreover, spacing of the spectral lines in conventional frequency combs often is too small and does not correspond to the channel spacing used in optical communications, which is typically larger than 20 GHz.

In their joint experiment, the researchers of KIT and the EPFL have now demonstrated that integrated optical frequency comb sources with large line spacings can be realized on photonic chips and applied for the transmission of large data volumes. For this purpose, they use an optical microresonator made of silicon nitride, into which laser light is coupled via a waveguide and stored for a long time. “Due to the high light intensity in the resonator, the so-called Kerr effect can be exploited to produce a multitude of spectral lines from a single continuous-wave laser beam, hence forming a frequency comb,” explains Jörg Pfeifle, who performed the transmission experiment at KIT. This method to generate these so-called Kerr frequency combs was discovered by Tobias Kippenberg, EPFL, in 2007. Kerr combs are characterized by a large optical bandwidth and can feature line spacings that perfectly meet the requirements of data transmission. The underlying microresonators are produced with the help of complex nanofabrication methods by the EPFL Center of Micronanotechnology. “We are among the few university research groups that are able to produce such samples,” comments Kippenberg. Work at EPFL was funded by the Swiss program “NCCR Nanotera” and the European Space Agency ESA.

Scientists of KIT’s Institute of Photonics and Quantum Electronics (IPQ) and Institute of Microstructure Technology (IMT) are the first to use such Kerr frequency combs for high-speed data transmission. “The use of Kerr combs might revolutionize communication within data centers, where highly compact transmission systems of high capacity are required most urgently,” Christian Koos says. He coordinates the work under a Starting Independent Researcher Grant funded by the European Research Council (ERC). “We are just at the beginning. In the experiment presented, we only use 20 lines of the frequency comb. This may certainly be increased. New experiments are planned.” Work at KIT is supported by the Alfried Krupp von Bohlen and Halbach Foundation.

The Ècole Polytechnique Fédéral de Lausanne (EPFL) is a technical university in Switzerland situated in the Canton Vaud, at the shore of the picturesque Lake Geneva. Together with the ETH Zurich the EPFL constitutes the ETH Domain of swiss national technical universities. EPFL is Europe’s most cosmopolitan technical university. It receives students, professors and staff from over 120 nationalities. With both a Swiss and international calling, it is therefore guided by a constant wish to open up; its missions of teaching, research and partnership impact various circles: universities and engineering schools, developing and emerging countries, secondary schools and gymnasiums, industry and economy, political circles and the general public.