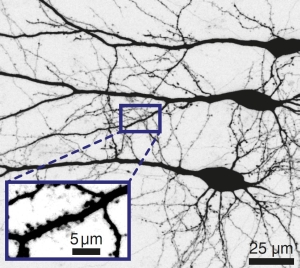 Networked nerve cells are the control center of organisms. In a nematode, 300 nerve cells are sufficient to initiate complex behavior. To understand the properties of the networks, re-searchers switch cells on and off with light and observe the resulting behavior of the organism. In the Science journal, sci-entists now present a protein that facilitates the control of nerve cells by light. It might be used as a basis of studies of diseases of the nervous system. DOI: 10.1126/science.1249375

To switch a nerve cell with light, certain proteins forming ion chan-nels in the cell membrane are used. These proteins are called chan-nelrhodopsins. If light strikes the channels, they open and ions enter and render the cell specifically active or inactive. In this way, a very fine tool is obtained to study functions in the network of nerve cells. So far, however, large amounts of light have been required and only closely limited areas in the network could be switched. The ChlocC channelrhodopsin presented now reacts about 10,000 times more sensitively to light than other proteins used so far for switching off nerve cells.

“For the modification of the protein, we analyzed its structure on the computer,” Marcus Elstner, KIT, explains. The theoretical chemist and his team modeled the proteins that consist of about 5000 atoms. For this purpose, they used the highest-performance computers of KIT’s computing center, the Steinbuch Centre for Computing, SCC. Together with the protein environment, i.e. the cell membrane and cell water, about 100,000 atoms had to be considered for the computations that took several weeks. “It was found that ion conductivity of the channel is essentially based on three amino acids in the central region, i.e. on about 50 atoms in the channel only.” By exchanging the amino acids, scientists have now succeeded in increasing the sensitivity of the ion channel.

Light-activated ion channels, the so-called channelrhodopsins, from microalgae have been used since 2005. In neural sections or living transgenic model organisms, such as flies, zebrafish, or mice, they allow for the specific activation of selected cells with light. Thus, understanding of their role in the cell structure can be improved. This technology is known as optogenetics and applied widely. In the past years, it contributed to the better understanding of the biology of signal processing. So far inaccessible neural pathways were mapped and many relationships were discovered among proteins, cells, tissues, and functions of the nervous system.

Within the framework of the study reported in the latest Science issue, researchers from Karlsruhe, Hamburg, and Berlin developed the ion channels further. Jonas Wietek and Nona Adeishvili working in the team of Peter Hegemann at the Humboldt-Universität Berlin have succeeded in identifying the selectivity filter of the channelrho-dopsins and in modifying it such that negatively charged chloride ions are conducted. These chloride-conducting channels have been called ChlocC by the scientists. Hiroshi Watanabe from the team of Marcus Elstner, Karlsruhe Institute of Technology (KIT), computed ion distribution in the protein and visualized the increased chloride distribution. Simon Wiegert from the team of Thomas Oertner of the Center for Molecular Neurobiology, Hamburg, demonstrated that ChlocC can be introduced into selected neurons for the inactivation of the latter with very small light intensities similar to the processes taking place in the living organism. With ChloC a novel optogenetic tool is now available that can be used in neurosciences to study the switching of neural networks together with the already known light-activated cation channels that mainly conduct sodium ions and pro-tons. This fundamental knowledge might help better understand the mechanisms of diseases like epilepsy and Parkinson’s. In some years from now, this may give rise to therapy concepts, which might be much more specific than the medical drugs used today.