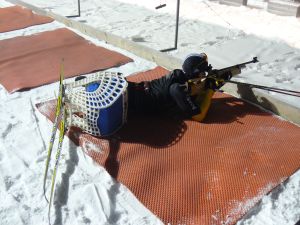 At the 2014 Paralympics in Sochi, athlete Martin Fleig will compete with a precisely adapted ski sled. (Photo: M. Scherge/KIT)

At the Paralympics in Sochi next week, a novel ski sled that has been optimized with respect to biomechanics and friction tech-nology will be used. The high-performance sled was developed by the MicroTribology Center, an institution of Karlsruhe Institute of Technology and the Fraunhofer Institute for Mechanics of Materials. The findings obtained under this “Snowstorm” research project might also be of benefit for recreational sports of persons with walking disabilities.

At the Paralympics in Sochi, ski athlete Martin Fleig will use a newly developed ski sled that is precisely fit to the individual needs of the multiple German champion in biathlon and cross-country skiing. With the help of biomechanical movement analyses, the seating position was determined, in which the athlete can optimally use his power. The 24-year-old competitive athlete, who has been suffering from walking disability since his birth, kneels on the metal sled and pushes it forwards with the help of ski poles. The sled was designed using 3D scanners and computers. “Adaptation of the seat to the body is very important to success. If the sled is part of the body, a maximum force flow and driving comfort result,” says Professor Matthias Scherge, Head of the MicroTribology Center at Pfinztal near Karlsruhe. Scherge is a tribology expert and studies friction, wear, and lubrication. He teaches at the Reliability of Components and Systems Division of the Institute for Applied Materials (IAM-ZBS) of Karlsruhe Institute of Technology (KIT) and coordinates the “Snowstrom” research project.

“For biathlon in particular, where the athlete lies down for shooting with a complex rotation movement and powerfully rises up to the seating position again, the sled has to be light and stable at the same time,” Scherge says.

As the skis mounted to the sled do not allow for any skating move-ments, polishing has to meet particular requirements. Scherge points out that apart from the high performance of the athlete and his sled, the interaction of snow and ski is important for the sliding speed on the track. Temperature, humidity, and the shape of the snow grains influence the sliding of the skis on the very thin water film. Prior to the competitions, the “Snowstorm” researchers collected numerous data relating to the snow, track, and weather at Sochi. The models based on these evaluated data are used to support the Nordic Skiing paralympics team in wax selection, ski polishing, and ski preparation for the competition.

A consortium of partners from science and industry is involved in the “Snowstorm” project. Apart from the KIT and the Fraunhofer Society, the Institute of Sport of Freiburg University, manufacturers of measurement instruments, precision mechanics companies, and ski wax specialists located in Baden-Württemberg are among the project partners. KIT’s Institute of Meteorology and Climate Research supplies the athletes with weather forecasts for Sochi up to 72 hours in advance. These forecasts are important for ski preparation and will be updated daily. “We want to demonstrate that handicapped people can also do snow sports,” Scherge says. He thinks that future construction of a simple version of the ski sled for recreational sports of people with a walking disability is feasible. “My vision is barrier-free skiing in the Black Forest for instance,” the scientist says.

Blog of the Snowstorm project: http://tcms-karlsruhe.de/