400,000 Euros for Pioneers of Electron Microscopy 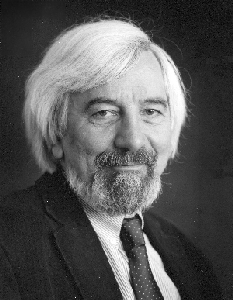 Maximilian Haider, honorary professor at KIT and founder of the CEOS company, wins the “Frontiers of Knowledge Award” of the BBVA Foundation. (Photo: private)

The physicist Maximilian Haider, honorary professor at KIT, is one of the winners of this year’s “Frontiers of Knowledge Award” in the amount of about EUR 400,000. The Spanish foundation BBVA honors Haider, together with Prof. Harald Rose, senior professor at Ulm University, and Prof. Knut Urban, Forschungszentrum Jülich, for the development of a new generation of so-called aberration-corrected electron microscopes that reach resolutions in the atomic range.

The jury emphasized that the new microscopes “represent a key technology in many areas of fundamental and applied research to study the effects of atomic dislocations on material properties and atomic interaction dynamics.” The electron microscopes can be used to investigate novel materials for improved data memories and processors, the properties of high-performance materials for fuel cells, batteries, or solar cells, or the function of biological macromolecules.

After long years of work, Haider, Rose, and Urban exceeded the theoretical limit of resolution of electron microscopy that once was the state of the art. An important instrument for materials science was improved considerably. Now, properties of materials on the atomic scale can be studied and better understood.

In 1990, the three scientists started a joint project to correct aberrations of optical lenses that had been known for nearly 60 years. To this end, Rose proposed a theoretical concept and Haider developed the corresponding instrument. Already in 1997 did the laboratory design reach a much better resolution. Correction of aberration is based on novel “non-spherical” electron optics consisting of so-called magnetic multipoles. They influence the electron beam such that the aberration of an objective lens is compensated similar to way glasses correct ametropia. As a result, image resolution is enhanced considerably.

In 2001, work of the scientists gave rise to the first application-oriented commercial prototype of a new generation of electron microscopes. Today, all big electron optics companies in the world are producing microscopes on the basis of these new electron optics. The new methods allow for the observation of single atoms at a very high resolution of about 50 picometers. One picometer corresponds to a billionth of a millimeter and, hence, to a distance that is about a hundred times smaller than the diameter of an atom.

Maximilian Haider was born in 1950 in Austria. He established and manages the company CEOS, Heidelberg, which originated from the above project. 200 microscopes based on the new electron optics are being used at universities and research laboratories all over the world. More than 90% of these microscopes were made by CEOS. Since 2008, Maximilian Haider has been working as a honorary professor at Karlsruhe Institute of Technology and its Laboratory of Electron Microscopy.

Further information on the website of the BBVA Foundation: http://www.fbbva.es/TLFU/tlfu/ing/microsites/premios/fronteras/galardonados/2013/ciencias.jsp

Click here for information on the KIT Laboratory of Electron Microscopy: http://www.lem.kit.edu/index.php.