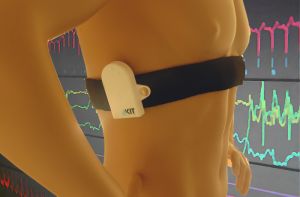 Compact and easy to apply: The sensor belt reliably monitors cardiac activity and other parameters for a long period of time. (Photo: KIT)

Patients suffering from cardiac diseases may rapidly become emergencies. Then, seconds decide about life and death. However, many cardiac diseases are announced several months before. Symptoms are simply overlooked. A long-term ECG may help. A sensor belt developed at KIT for the first time allows to document cardiac activity of a patient over a long term all around the clock for up to six months. The sensor belt is now presented by the researchers at the Medica trade fair in Düsseldorf.

“The sensor belt also detects very rare cardiac events and, hence, helps find an appropriate therapy,” Wilhelm Stork of Karlsruhe Institute of Technology explains. By means of the device, a number of parameters, such as cardiac and breathing frequency, activity, and conductivity can be measured continuously over a very long term and an electrocardiogram (ECG) is recorded. “Then, the doctor has all the data he needs to help the patient so early that no emergency develops.”

Karlsruhe Institute of Technology, the Karlsruhe Municipal Hospital, and the University Hospital of Tübingen tested long-term usability of the sensor belt. About 50 test persons took part and wore the belt for some days up to some weeks and for about two weeks on the average. Before, the patients had suffered from an acute cardiac insufficiency. In the post-treatment phase, the sensor belt was applied for continuous monitoring. One test person was even monitored for a continuous period of six months.

The sensor belt contains four novel dry electrodes. As a result, irritation of the skin is prevented. Wearing comfort is ensured for months and very reliable measurement data are collected. The patient can easily apply the belt on his own. “The belt resembles known pulse monitors for joggers and also looks similar. However, it records far more data,” Malte Kirst, one of the developers at KIT, says. Measurement electronics has about the weight and size of a small mobile phone. Over a period of a week, more than 1 gigabyte of data are acquired. Then, the memory card is read out and the accumulator is recharged. “Due to the special design and data evaluation, a usable ECG is recorded for about 99% of the time even when single electrodes fail as a result of body movement, for instance,” Kirst says. He generated parts of the analysis software at the Research Center for Information Technology (FZI) before he came to KIT.

Conventional mobile ECG measurement devices require conductive pastes. The self-adhesive electrodes are attached precisely to the skin by medical staff. Often, skin irritations occur after some days or the paste dries out. As a rule, data are recorded for 24 hours, sometimes for seven days. In case of high-risk patients, the measurement devices used for monitoring may also be implanted by an operation. The new sensor belt combines the advantages of both systems and has no drawbacks. It might be an easy help for more patients.

Chronic cardiac insufficiency is one of the most frequent cardiovascular diseases, the persons affected in Europe totaling about 10 million. More than 40% of the patients die within five years upon diagnosis. The disease causes billions of healthcare costs due to the intensive treatment of emergencies and subsequent long stays at hospitals. Hence, it is highly beneficial for both patients and the healthcare system to diagnose starting cardiac failure (decompensation) at an early point of time and to initiate treatment. By means of continuous monitoring with e.g. the sensor belt, decompensation can be predicted and measures can be taken in due time.

The sensor may also be applied for the diagnosis of atrial fibrillation and so-called syncopes, i.e. spontaneous losses of consciousness. About 400,000 patients in Germany are affected. “Reliable, long-term ECGs are required in order to identify or exclude the heart as the cause,” Stork says. A team of four is presently working on turning the sensor belt prototype into a medical product for this application. Under the Exist programme of the Federal Ministry of Economics, the development work is funded with EUR 500,000.