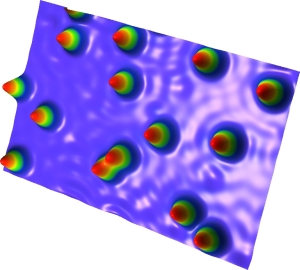 One atom equals one bit: According to this design principle, we would like to construct magnetic data memories in the future. Presently, a compound of several million atoms is needed to stabilize a magnetic bit in a way that hard disk data are secure for several years. However, researchers from KIT have just made a big step towards a single-atom bit: They fixed a single atom on a surface such that the magnetic spin remained stable for ten minutes. Their report is published in the current issue of the Nature magazine (DOI 10.1038/nature12759).

“Often, a single atom fixed to a substrate is so sensitive that its magnetic orientation is stable for fractions of a microsecond (200 nanoseconds) only,” Wulf Wulfhekel from Karlsruhe Institute of Technology (KIT) explains. Together with colleagues from Halle, he has now succeeded in extending this period by a factor of about a billion to several minutes. “This does not only open up the possibility of designing more compact computer memories, but could also be the basis for the setup of quantum computers,” Wulfhekel says. Quantum computers are based on quantum physics properties of atomic systems. In theory at least, their speed might exceed that of classical computers by several factors.

In their experiment, the researchers placed a single holmium atom onto a platinum substrate. At temperatures close to absolute zero, i.e. at about 1 degree Kelvin, they measured the magnetic orientation of the atom using the fine tip of a scanning tunneling microscope. The magnetic spin changed after about 10 minutes only. “Hence, the magnetic spin of the system is stable for a period that is about a billion times longer than that of comparable atomic systems,” Wulfhekel emphasizes. For the experiment, a novel scanning tunneling microscope of KIT was applied. Thanks to its special cooling system for the temperature range close to absolute zero, it is nearly vibration-free and allows for long measurement times.

“To stabilize the magnetic moment for longer periods of time, we suppressed the impact of the surroundings on the atom,” Arthur Ernst from the Max Planck Institute of Microstructure Physics explains. He performed theoretical calculations for the experiment. Normally, the electrons of the substrate and of the atom interact quantum-mechanically and destabilize the spin of the atom within microseconds or even faster. When using holmium and platinum at low temperatures, disturbing interactions are excluded due to the symmetry properties of the quantum system. “In principle, holmium and platinum are invisible to each other as far as spin scattering is concerned,” Ernst says. Now, the holmium spin might be adjusted and information might be written by means of external magnetic fields. This would be the prerequisite for the development of compact data memories or quantum computers.