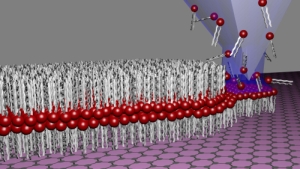 Researchers around Dr. Michael Hirtz from Karlsruhe Institute of Technology and Dr. Aravind Vijayaraghavan from the University of Manchester have developed a new method to produce artificial membranes: Using a nanoscaled tip, they write tailored patches of phospholipid membrane onto a graphene substrate. The resulting biomimetic membranes, i.e. membranes simulating biological structures, allow for the specific investigation of functions of cell membranes and the development of novel applications in medicine and biotechnology, such as biosensors. The method is now presented online in “Nature Communications”.

Lipids (from Greek lipos, “fat”) are central structural elements of cell membranes. The human body contains about 100 trillion cells, each of which is enveloped in a cell membrane which essentially is a double layer of partly hydrophilic, partly hydrophobic phosphorus-containing lipids. These cell membranes contain numerous proteins, ion channels, and other biomolecules, each performing vital functions. It is therefore important to study cell membranes for many areas of medicine and biotechnology. Better understanding of their functions will open up novel applications, such as sensors with biological components, use of enzymes as catalysts, or specific introduction of medical substances. However, it is very difficult to study the membranes directly in live cells inside the human body.

Consequently, researchers frequently use model membranes that are applied to special surfaces. These biomimetic systems, i.e. systems simulating biological structures, are more convenient and can be controlled much better. An international group of researchers around Dr. Michael Hirtz, head of the project in the research unit of Professor Harald Fuchs at the KIT Institute of Nanotechnology (INT), and Dr. Aravind Vijayaraghavan from the University of Manchester, Great Britain, now presents a new method to produce biomimetic membranes: They write tailored patches of phospholipid membrane onto a graphene substrate by means of lipid dip-pen nanolithography (L-DPN), a method developed at KIT.

“The L-DPN technique uses a very sharp tip to write lipid membranes onto surfaces in a way similar to what a quill pen does with ink on paper,” explains Dr. Michael Hirtz from the INT. This tip has an apex in the range of a few nanometers only and is controlled with a high precision by a machine. In this way, minute structures can be produced, smaller than cells and even down to the nanoscale (1 nanometer corresponds to 10-9 meters). By employing parallel arrays of these tips, different mixtures of lipids can be written in parallel, allowing for patterns of variable chemical composition with a size smaller than that of an individual cell.

The graphene that is used as a substrate is a semi-metal with unique electronic properties. According to Dr. Aravin Vijayaraghavan from the University of Manchester, the lipids applied onto graphene spread uniformly, thus forming high-quality membranes. Other advantages of graphene are its tunable conductivity and its property to quench fluorescence of labeled phospholipids. When the lipids contain the corresponding binding sites, such as biotin, the membranes actively bind streptavidin, a protein produced by certain bacteria and used in various biotechnological methods. When the lipids are charged, charge is transferred from the lipids into graphene. This changes the conductivity of graphene, which may be used as a detection signal in biosensors.

The researchers around Hirtz will use their biomimetic membranes in the future to construct novel biosensors based on graphene and lipids. It is planned to design sensors that react to the binding of proteins by a change of conductivity as well as sensors detecting the function of ion channels in membranes. Ion channels are pore-forming proteins via which electrically charged particles can cross the membrane. “Protein sensors might be applied in medical diagnostics. Controlling the function of ion channels is important in drug research,” the KIT scientist says.