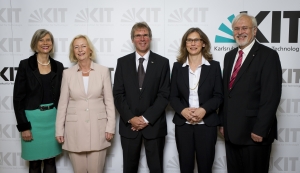 
KIT has a new president. Today, the new president Holger Hanselka was inaugurated. Federal Minister of Education and Research Johanna Wanka and Undersecretary of the Baden-Württemberg Ministry of Science, Research, and the Arts Simone Schwanitz called Professor Hanselka their perfect cast from both the professional and the personal point of view. The ministries thanked the retiring president Eberhard Umbach for his efforts in establishing the KIT.

During the inauguration ceremony, Federal Minister of Research Johanna Wanka underlined the exceptional role of KIT: “Within a few years, KIT has earned international reputation. This successful establishment phase clearly bears Mr. Umbach’s signature.” At the same time, Wanka emphasized that expectations from KIT will continue to be high and said: “We all will closely pursue the further development of KIT, the successfully started merger of a university and a large-scale research institution. Of course, this will also affect further development of science in Germany. Mr. Hanselka now faces the great task to further and to realize the innovative idea of KIT.”

Undersecretary of the Baden-Württemberg Ministry of Science, Research, and the Arts Simone Schwanitz said: “The KIT is a unique institution in the German science sector and Professor Hanselka today takes over the unique post as president of KIT. Completion of the merger is a big and great challenge. In recent years, integration progressed considerably and experienced an effective push in the past months. I would like to encourage all to proceed along this path. Professor Umbach did not only decisively determine the foundation of this institution, he also largely influenced the first years of KIT. For this and for his high commitment, I would like to thank him very much.”

The Chairperson of the KIT Supervisory Board, Professor Renate Schubert, cordially congratulated Holger Hanselka on his inauguration: “Professor Hanselka faces big tasks at KIT. I am sure that he will considerably advance the strategic development of this institution with his energy and creativity. His capability of taking along the members of KIT on all levels and in all areas will help him a lot.“ In addition, Schubert pointed out: “KIT owes the retiring president, Professor Eberhard Umbach, much. On behalf of the KIT Supervisory Board, I would like to thank him cordially for his high commitment in the first foundation phase of KIT and for his enthusiasm for the idea of KIT.”

“For me, presidency is a big honor and challenge to which I am looking forward, as there is nothing to model this unique project in German and European science on,” said the new president of KIT, Professor Holger Hanselka. He thanked his predecessor for his courageous and successful steps in the merger process. “However, I am aware of the fact that we still have a far way to go. It will be one of my paramount objectives as president of KIT to sharpen the research profile so as to fully utilize the potentials resulting from the merger. I know both sectors of the science system and the market. Based on this experience, I would like to lead the KIT into a stable future during these times of big technological change and to make the trademark of KIT clearly visible on the international level.”

The former president of KIT, Professor Eberhard Umbach, now will go into retirement. Since the merger in 2009, Umbach has managed the KIT, first together with his colleague, Professor Horst Hippler. Since September 2012, he has been the sole president. “Making the idea of the KIT merger come true was a big task when we started seven years ago – we were pioneers,” Umbach said. “More rapidly than promised in our Institutional Strategy and more rapidly than expected by everybody, we succeeded in realizing the merger - with the support of politics. We had to get over the defeat in the Excellence Initiative, but we learned from it and today, we can harvest some fruits of the merger already. In international rankings, KIT climbs upwards and we are very successful in acquiring third-party funding. In particular, the integration process advanced considerably in the past year. I wish my successor in office continued success and good luck. I am sure he will promote unity and strengthen the visibility of KIT.”

The President of the Helmholtz Association, Professor Jürgen Mlynek, thanked the former president Umbach for his successful establishment work that can now be continued by the new president: “Professor Hanselka is an excellent scientist. Moreover, he is a science manager equally acknowledged by universities and non-university research institutions,” Mlynek said. “I am sure that he will succeed in optimally unfolding the potential of KIT as a novel cooperation model of a university and a non-university research institution.”

Apart from the president, the members of the presidential committee of KIT as of October 01 are Vice-Presidents Dr. Elke Luise Barnstedt (Human Resources and Law), Dr. Ulrich Breuer (Finance and Business Affairs), Professor Detlef Löhe (Research and Information), and Professor Alexander Wanner (Higher Education and Academic Affairs). Another Vice President as envisaged by the KIT Act will be appointed later after a new definition of the scope of responsibilities.

Professor Holger Hanselka was born in 1961 and studied mechanical engineering at the Clausthal Technical University. In 1988, he took up work as a scientist at the German Aerospace Center (DLR) and specialized in the fields of lightweight construction and fiber composites. After a professorship at the Otto von Guericke University of Magdeburg, Hanselka was appointed Director of the Fraunhofer Institute for Structural Durability and System Reliability and Head of Institute for System Reliability and Machine Acoustics of the Technical University in Darmstadt in 2001. From 2006 to 2012, Hanselka was member of the Presidential Council of the Fraunhofer Gesellschaft. From 2010 to fall 2013, he was Vice-President of TU Darmstadt. Hanselka is expert for knowledge and technology transfer, cooperation activities between science and industry, and formation of spinoffs. In 2000, he was awarded the Science Prize by the Stifterverband for a leading BMBF project. Hanselka is member of the acatech – National Academy of Science and Engineering – as well as of various bodies and associations and partly assumes positions in their management.