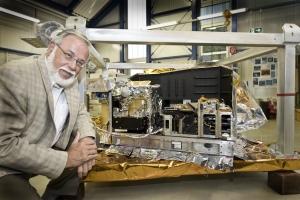 The prize in the amount of EUR 7000 was handed over to Professor Herbert Fischer at the “DACH 2013” meteorological conference in early September in Innsbruck. “His enormous perseverance and high commitment for more than four decades have contributed decisively to the high level and worldwide visibility of our discipline,” said Professor Johannes Orphal, Head of the Institute of Meteorology and Climate Research – Atmospheric Trace Gases and Remote Sensing (IMK-ASF) of KIT and scientific spokesperson of the KIT Climate and Environment Center, in his laudation.

Scientific work of Herbert Fischer focuses on dynamic and chemical processes as well as on the dispersion of electromagnetic radiation in the atmosphere. In particular, Fischer concentrates on remote sensing of trace substances, trace gases and aerosols, in the atmosphere. They contribute to the greenhouse effect on earth and influence the ozone layer. Herbert Fischer is deemed one of the pioneers of Fourier transform infrared spectrometry for atmospheric remote sensing worldwide. With the help of this technology, global concentration of trace gases in the atmosphere can be determined continuously. Among others, Fischer developed the MIPAS (Michelson Interferometer for Passive Atmospheric Sounding) instrument for use on the ground, on balloons, aircraft, and satellites.

“I am very happy about the scientific community honoring my work,” said Professor Fischer when he received the Georgi Prize. He will use the prize money for establishing a foundation within the German Meteorological Society (DMG) to support young scientists in the area of remote sensing.

Herbert Fischer, born in 1942 in Zweibrücken, studied physics at the Ludwig-Maximilians-Universität (LMU), Munich, where he was conferred his PhD and his post-doctoral lecture qualification in the field of meteorology. In 1986, he was appointed Head of the joint Institute of Meteorology and Climate Research (IMK) of the then Kernforschungszentrum Karlsruhe and Universität Karlsruhe. At IMK, he established the divisions of “Trace Gases in the Stratosphere” and “Remote Sensing of Atmospheric Parameters.” He assumed a number of national and international positions and honorary posts. Presently, he is Deputy Chairman of the German Meteorological Society, chairs the Reinhard Süring Foundation, and is Deputy Chairman of the Section of Geophysics/Meteorology of the National Academy Leopoldina.