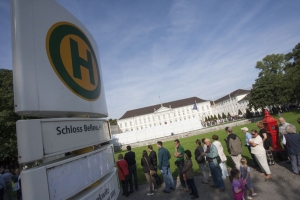 Overcoming stereotypes, strengthening civil society, and promoting cultural diversity: The Anna Lindh Foundation supports the dialog of cultures in the Euro-Mediterranean area. As one of 24 selected organizations, it will present its work at the Citizens Party of the Federal President on August 30 and 31 in Berlin. The ZAK | Center for Applied Science and Studium Generale at KIT coordinates the Network together with the Goethe-Institut e.V. and has compiled an interesting program.

The enriching diversity of the Mediterranean area and the associated current challenges are in the focus of the program of the Anna Lindh Foundation at the Citizens Party of Federal President Joachim Gauck: “And instrument treasure chest of the Mediterranean for children, enthralling tales of Arab poets, interactive performances, mini workshops or video installations show how fascinating “Euromed”, that is the European-Mediterranean area, may be and how diverse the network is,” the Director of ZAK, Professor Caroline Y. Robertson-von Trotha, says.

On the main stage of the Citizens Party, the SPD politician Dr. Lale Akgün, the professional boxer and double world champion Rola El-Halabi, and other others will discuss about interculturality, identity, and limits of tolerance. This panel discussion on “Migration - integration – racism: Old and new challenges” was conceived by Professor Robertson-von Trotha and will take place on August 31.

The Citizens Party of the Federal President on August 30 and 31, 2013 will kick off this year’s Common Action. The Common Action is a German-wide series of events of the German Anna Lindh Network presenting the potential of the Mediterranean area in several German cities for some months. In 2013, the events will focus on the subject of “Gelebte Vielfalt – und ihre Grenzen” (Lived Diversity – and Its Limits).

About the Anna Lindh Foundation

The Anna Lindh Foundation named after the murdered Swedish politician was established in Alexandria in 2005. The foundation considers itself a network of networks. Meanwhile, it has more than 4000 member organizations in 43 member states. The German network has about 150 members. Among them are associations, foundations, institutes or media working in the areas of arts and culture, migration, inter-religious dialog, youth work, and political education in cooperation with partners from the Mediterranean area. The German network consists of the three clusters of “Arts and Culture”, “Migration”, and “Science”, the latter being a new cluster initiated by ZAK. These clusters are joined by members pursuing the objectives of the foundation from specific perspectives. In general, the clusters are open to all members. International exchange is promoted by concrete projects and the annual network meeting.

Since 2006, ZAK has been member of the German network of the Anna Lindh Foundation. In March 2012, Professor Dr. Caroline Y. Robertson-von Trotha and Swenja Zaremba were elected new coordinators of the network. Mirjam Gruhler has been working in the coordination team for some months now.