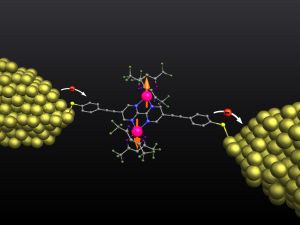 The molecule of about 2 nm in size is kept stable between two metal electrodes for several days. (Figure: Christian Grupe/KIT)

A team of physicists has succeeded in performing an extraordinary experiment: They demonstrated how magnetism that generally manifests itself by a force between two magnetized objects acts within a single molecule. This discovery is of high significance to fundamental research and provides scientists with a new tool to better understand magnetism as an elementary phenomenon of physics. The researchers published their results in the latest issue of Nature Nanotechnology (doi: 10.1038/nnano.2013.133).


For this purpose, the team headed by Mario Ruben used a customized molecule of two cobalt ions for the experiment. At Erlangen, Heiko B. Weber and his team studied the molecule in a so-called single-molecule junction. This means that two metal electrodes are arranged very closely to each other, such that the molecule of about 2 nm in length is kept stable between these electrodes for many days, while current through the junction can be measured. This experimental setup was then exposed to various, down to very deep, temperatures.


The scientists found that magnetism can be measured in this way. The magnetic state in the molecule became visible as Kondo anomaly. This is an effect that makes electric resistance shrink towards deep temperatures. It occurs only when magnetism is active and, hence, may be used as evidence. At the same time, the researchers succeeded in switching this Kondo effect on and off via the applied voltage. A precise theoretical analysis by the group of Assistant Professor Karin Fink from Karlsruhe Institute of Technology determines the various complex quantum states of the cobalt ion pair in more detail. Hence, the researchers succeeded in reproducing elementary physics in a single molecule.