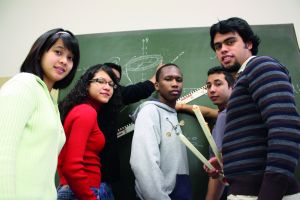 Learning together: At the Studienkolleg, foreign students from all over the world prepare for university studies in Germany. (Photo: Studienkolleg)

For more than 50 years, it has been the first contact point for students from more than 100 countries worldwide: The Studienkolleg at Karlsruhe Institute of Technology (KIT) prepares them for their studies at a German university. Courses are offered to train German language as well as mathematics and natural sciences. It is aimed at adapting the scientific and language skills of the students to the level of lectures at German universities. The Studienkolleg will celebrate its 50th anniversary on Thursday, July 11, 2013, at the Festsaal of KIT’s Studentenhaus.

The Studienkolleg was established in 1963 at the then Karlsruhe Technical University. For five decades, it has been offering support for foreign students starting their university studies in Germany: “KIT attaches particular value to internationality in studies and teaching, a major objective being international exchange. The Studienkolleg prepares our freshmen from abroad for their studies and provides them with the basic scientific knowledge and language proficiency required. This is an important basis for a successful start of university studies,” Professor Alexander Wanner, KIT Vice President for Higher Education and Academic Affairs, says.

Foreign applicants, whose final school certificate does not entitle them to directly start studies in Germany, are offered a preparation course of two semesters for the entrance examination in mathematics, natural sciences, and in German,” explains Dr. Claudia Goll, Director of the Studienkolleg, Language Center, and MINT-Kolleg Baden-Württemberg at KIT. If the applicants pass the entrance examination, they are qualified to start studies at German universities and colleges.

Since 1989, the Language Center has been part of the Studienkolleg. It offers language courses on several levels in fourteen languages to all students of KIT. Since 2012, Studienkolleg has been cooperating with the Beijing Institute of Technology (BIT) (http://www.kit.edu/visit/pi_2012_10119.php). It organizes DSH examinations at the universities of Metz, Shanghai, and Beijing.

The institution will celebrate its anniversary on Thursday, July 11, 2013, 15.30 hrs, at the Festsaal of the Studentenhaus (Ade-nauerring 7, KIT Campus South).
Representatives of the media are cordially invited and asked to re-gister using the form enclosed.

Information on the Studienkolleg: www.stk.kit.edu/english/.