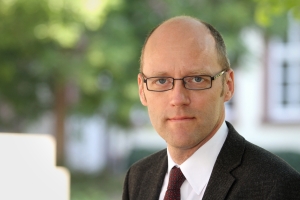 Professor Alexander Wanner will take office as Vice President for Higher Education and Academic Affairs on June 01, 2013. The materials scientist is highly familiar with all aspects of studies and academic education: From October 2008 to 2012, Wanner was Studies Dean of the Department of Mechanical Engineering. Since September 2012, he has been working as Chief Higher Education Officer (CHEO) as a successor of Professor Horst Hippler, one of the two founding presidents of KIT, who had been the acting Vice President for Higher Education after KIT foundation.

“Education is our future and a core task of KIT,” says Wanner. “We will constantly advance education at KIT and adopt highest academic standards on the cutting edge of research in the service of society.” Wanner attaches particular value to a close dialog with teachers, students, and employees. Wanner considers the establishment and accreditation of a quality management system for education and studies, the increase in study places for master students, the reform of the education of teachers-to-be, and positioning of KIT in the further academic education to be of highest priority at the beginning of his term of office.

“All parties involved are happy that we succeeded in appointing the Vice President for Higher Education and Academic Affairs at KIT so quickly,” says the Chairperson of the KIT Supervisory Board, Professor Renate Schubert, who was responsible for the selection and appointment procedure. “I am pleased that we were able to win Alexander Wanner, a highly committed and competent colleague,” KIT President Professor Eberhard Umbach points out. “As the new Vice President, he will also work on increasingly interlinking education on Campus South and Campus North.”

The Unabhängiger Studierendenausschuss UStA (independent students’ committee) welcomes the decision: “As professor at the Institute for Applied Materials, an institute pooling the competences of all materials researchers at KIT, Wanner stands for the growing together of KIT. With him, education will be present everywhere at KIT in the future,” says the Chairman of UStA, Noah Fleischer.

Professor Alexander Wanner, born in 1962, studied metallurgy and did his doctorate at Stuttgart University. Employment as a scientist by the Max Planck Institute for Metals Research, Stuttgart, and work as member of the academic staff at Stuttgart University were followed by research stays at the Northwestern University and Argonne National Laboratory, USA, as well as at the Shanghai Jiao Tong University. In 2003, Wanner was appointed Professor for Materials Science by Universität Karlsruhe and then by KIT. Since 2011, he has been spokesperson of the Matter and Materials Competence Area. He was significantly involved in the establishment of the Institute for Applied Materials that pools the competences of all materials scientists at KIT. In 2008, Wanner was appointed Studies Dean of the Department of Mechanical Engineering. Since fall 2012, he has been Chief Higher Education Officer of KIT. Alexander Wanner was involved in various campus-overlapping projects, among others in the Collaborative Research Area SFB 499 Mikrourformen (micro molding).