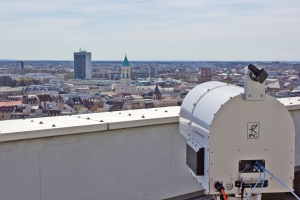 A distance of over one kilometer has already been covered by using a long range demonstrator between two skyscrapers in Karlsruhe. (Photo: Ulrich Lewark / KIT)

Researchers of the Fraunhofer Institute for Applied Solid State Physics and the Karlsruhe Institute for Technology have achieved the wireless transmission of 40 Gbit/s at 240 GHz over a distance of one kilometer. Their most recent demonstration sets a new world record and ties in seamlessly with the capacity of optical fiber transmission. In the future, such radio links will be able to close gaps in providing broadband internet by supplementing the network in rural areas and places which are difficult to access.

Digital, mobile and networked – changing media usage habits of modern society require the faster transmission of increasing vol-umes of data. Compared to the European standard, Germany lags behind in the expansion of the fiber-optic network, according to statistics from the FTTH Council Europe. Deploying new fiber-optic cables is expensive and difficult when there are natural or urban obstacles such as rivers or traffic junctions. Broadband radio links can help to overcome such critical areas, thereby facilitating the expansion of the network infrastructures. In rural areas they can be a cost-effective and flexible alternative to “Fiber to the Home”.

Researchers have now set a new world record in wireless data transmission: For the first time, fully integrated electronic transmit-ters and receivers have been developed for a frequency of 240 GHz, which allows the transmission of data rates of up to 40 Gbit/s. This equals the transmission of a complete DVD in under a second or 2400 DSL16000 internet connections. Distances of over one kilometer have already been covered by using a long range demonstrator, which the Karlsruhe Institute of Technology set up between two skyscrapers as part of the project “Millilink”. “We have managed to develop a radio link based on active electronic circuits, which enables similarly high data rates as in fiber-optic systems, therefore allowing seamless integration of the radio link”, says Prof. Ingmar Kallfass, who coordinated the project at Fraunhofer IAF within the scope of a Shared Professorship between IAF and KIT. Since 2013, Kallfass is with the University of Stuttgart, where he continues to lead the project. 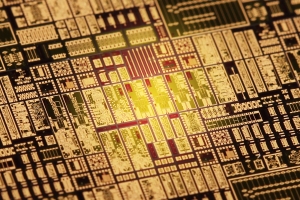 Using the high frequency range between 200 and 280 GHz not only enables the fast transmission of large volumes of data, but also results in very compact technical assembly. Since the size of elec-tronic circuits and antennae scales with frequency / wavelength, the transmitter and receiver chip only measures 4 x 1.5 mm². The semi-conductor technology developed at Fraunhofer IAF, based on tran-sistors with high carrier mobility (HEMT), makes it possible to use the frequency between 200 and 280 GHz with active transmitters and receivers in the form of compact, integrated circuits. The at-mosphere shows low attenuation in this frequency range, which enables broadband directional radio links. “This makes our radio link easier to install compared to free-space optical systems for data transmission. It also shows better robustness in poor weather condi-tions such as fog or rain”, explains Jochen Antes of KIT.

Up to now, radio links were not able to directly transmit the data rates of glass fiber. This might change in the future, as the test setup of the project shows. Such a high performance system would also have the advantage of the so-called bit transparency, i.e. the signal of a glass fiber could be fed directly and without energy-consuming transcoding into a radio link. It could then be transmitted and redirected into a glass fiber. The record data from the test setup is only the beginning. “Improving the spectral efficiency by using more complex modulation formats or a combination of several channels, i.e. multiplexing, will help to achieve even higher data rates”, says Antes. This could give new impetus to the expansion of the broadband network. Maybe Germany will then no longer occupy the lower ranks compared to the rest of Europe.

The Fraunhofer Gesellschaft is the leading organization for applied research in Europe. Its research activities are conducted by 66 Fraunhofer Institutes and independent research units at over 40 different locations throughout Germany. The Fraunhofer-Gesellschaft employs a staff of around 22,000, who work with an annual research budget totaling 1,9 billion euros. Roughly two thirds of this sum is generated through contract research on behalf of industry and publicly funded research projects. Branches in the USA and Asia serve to promote international cooperation.