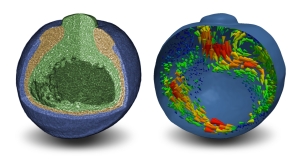 Classical X-ray radiographs provide information about internal, absorptive structures of organisms such as bones. Alternatively, X-rays can also image soft tissues throughout early embryonic development of vertebrates. Related to this, a new X-ray method was presented recently in a Nature article published by a German-American-Russian research team led by KIT. For periods of about two hours, time-lapse sequences of cellular resolution were obtained of three dimensional reconstructions showing developing embryos of the African clawed frog (Xenopus laevis). Instead of the absorption of X-rays, the method is based on their diffraction (DOI: 10.1038/nature12116).

“X-ray diffraction enables high-resolution imaging of soft tissues,” explains Ralf Hofmann, one author of the study and physicist at KIT. “In our work, we did not only manage to resolve individual cells and parts of their structure, but we could also analyze single cell migration as well as the movement of cellular networks.”

Using X-ray diffraction, similar tissues can be distinguished by minute variations of their refractive index. However, in contrast to classical absorption imaging, this does not require any contrast agent, and X-ray dose is profoundly reduced. The method is of particular advantage when probing sensitive tissues in living organisms, such as frog embryos. In their study, the researchers concentrated on the motion and shape changes of tissues, cavities, and single cells during the developmental milestone of gastrulation.

During gastrulation, germ layers are formed and organized in their proper locations. Thereby, an initially simple spherical ball of a few hundred cells turns into a complex, multilayered organism with differentiated tissues eventually turning into the nervous system, muscles, and internal organs. Quoting the renowned developmental biologist Lewis Wolpert: “it is not birth, marriage, or death, but gastrulation that is the most important event in your life.”

“Employing X-rays, we were able to watch joint and individual cell movements during gastrulation,” zoologist Jubin Kashef points out who is a co-author and head of a young investigator group at KIT. For the first time, it was appreciated how cells interact with each other in a living embryo and how regions void of cells form and disappear. “It is like the migration of peoples. Stimulated by the migration of individual cell groups, other cells join in. They form functional cellular networks, which adjust to their changing environment. During migration, cells specialize to form progenitor tissues of future organs, e.g. the brain or skin.”

“It is fascinating to have digital capabilities to observe and analyze these processes in an individual living frog embryo,” Hofmann and Kashef emphasize. “In this way, fundamental results are obtained.” The new method not only reveals morphological and dynamic aspects of embryonic development but also provides insights into their underlying molecular biology obtained by comparing the development of wildtype embryos and morphant phenotypes. The African clawed frog (Xenopus laevis) is one of the most important model systems of developmental biology whose study is of relevance in understanding human embryogenesis and diseases. In future research, morphant phenotypes will be correlated with the targeted switch-offs of key proteins. For this purpose, the novel technique -- combining latest X-ray measurement technology with advanced image analysis and developmental biology -- will be established at the synchrotron radiation facilities ANKA in Karlsruhe and APS in Chicago for routine use by a broad community of scientific users.

In their study, KIT researchers, which were supported by biologists from Northwestern University, used coherent X-rays from the Advanced Photon Source of Argonne National Laboratory in Chicago. Prior to this investigation, the method had been developed at ANKA. During measurement, a coherent bundle of X-rays passes the nearly spherical 1-mm frog embryo, which rotates half way around its axis within 18 seconds. By variation of the irradiation direction, information on the three-dimensional (3D) structure is acquired. As X-rays pass through different types of tissues at variable speeds, diffraction occurs. In turn, this generates a characteristic intensity distribution by interference a certain distance behind the embryo. Within the 18 s of tomographic scan time, about 1200 images were recorded. Similar to digital photography, every image consists of several million pixels. From this vast amount of data, the three-dimensional structure and the development of the embryo over time is inferred at micrometer resolution. If this process is repeated at intervals of several minutes, the resulting sequence of 3D images reveals all gastrulation movements occurring inside the embryo. Image reconstruction and analysis algorithms for the here-employed X-ray phase-contrast microtomography were developed at ANKA.

Immediate results of this research are the discovery of new morphological structures and the clarification of fluid redistribution processes. Moreover, the locations of centers driving the migration of tissues and cells during gastrulation were determined by differential flow analysis.