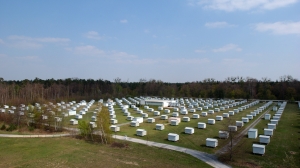 The KASCADE-Grande measurement field on the premises of KIT was used by scientists to study particle showers produced by cosmic rays. (Photo: KIT)

It is obvious from the data of the KASCADE-Grande experiment at the Karlsruhe Institute of Technology (KIT) that the so-called “knee” of the cosmic rays, a bend in the energy spectrum at high energies, is located at different energies for light and heavy particles. As regards light particles, the scientists have now found that the energy spectrum flattens again beyond the knee and forms a type of “ankle”. This structure indicates that cosmic radiation particles with energies beyond the knee are accelerated in galaxies other than the Milky Way.

KIT’s KASCADE-Grande experiment has yielded the important result that a characteristic bend in the energy spectrum of high-energy cosmic rays, also called “knee”, is located at different energies for light and heavy primary particles. The position of the knee appears to vary with the charge of atomic nuclei: KASCADE-Grande detect-ed the “iron knee” at an energy that was 26 times higher than the knee in the spectrum of hydrogen nuclei. Latest findings of the KASCADE-Grande experiment reveal a flattening (also called “anti-knee” or “ankle”) of the spectrum of light primary particles above an energy of 1017 electron volts. This structure indicates the existence of a new, now extragalactic component of cosmic rays. This im-portant result in high-energy astrophysics was published recently by the scientists in the “Physical Review D” journal.

KASCADE-Grande was a measurement field for cosmic rays on the premises of KIT Campus North. The KASCADE experiment was extended by another 37 detector stations and measured particle showers produced by high-energy primary cosmic rays for more than a decade. “With KASCADE-Grande, we measured showers of secondary particles produced by primary particles of cosmic origin at energies of 1014 to 1018 electron volts,” explains Dr. Andreas Haungs who coordinates the KASCADE-Grande project at KIT. 1018 electron volts: This exceeds the energy reached by the largest particle accelerators on Earth by several orders of magnitude. The worldwide known and acknowledged experiment was shut down last year. But current analysis of the full data set again yielded a scientific highlight 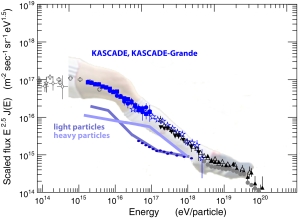 The spectrum of cosmic rays with knee and ankle. While the knee is measured at different energies for light and heavy primary particles, KASCADE-Grande has now for the first time revealed an ankle-like structure for light primary particles. (Graphics: KIT)

The flux of cosmic rays, i.e. of primary particles that can probably be found anywhere in the universe, decreases strongly with increasing particle energy. Slightly above an energy of 1015 electron volts, the “slope” of energy decrease changes: This leads in a bend in the spectrum, the “knee” of cosmic radiation. KASCADE-Grande demonstrated that the knee occurs at different energies for light and heavy elements and that this difference is related to charge. But where does the knee come from and why does its cause depend on the charge of the cosmic particle? This might be explained by mag-netic fields in the vicinity of cosmic accelerators. Towards higher energies, they work more effectively for particles of higher charge. Moreover, our galaxy possesses a magnetic halo that prevents most of the particles from leaving our Milky Way. It was concluded from the results of KASCADE-Grande that the primary particles of cosmic rays can be generated and stored in our Milky Way up to energies around 1017 electron volts only. Particles of higher energy have their origin outside of the Milky Way. The transition from galactic to extragalactic cosmic radiation is assumed to lie in the energy range slightly above 1018 electron volts, at the so-called “ankle” of the spectrum. According to the above theory relating to the formation of the knee, the transition to mainly extragalactic cosmic radiation is supposed to become visible in the energy spectrum of light primary particles first, as these are the first to leave their home galaxy.

The identification of an ankle-like structure in the light component at relatively low energies favors theories predicting an early contribu-tion of extragalactic cosmic radiation. “Future results of other exper-iments studying the spectrum at highest energies will show whether the high-energy light primary particles measured by KASCADE-Grande really are atomic nuclei from another galaxy,” says Sven Schoo, the KIT diploma student who analyzed the data. One of these experiments is the Pierre Auger Observatory in Argentina, in the setup and scientific evaluation of which KIT is also involved.

The KASCADE-Grande project is embedded in an international col-laboration with scientists from the universities and research institu-tions in Lodz (Poland), Michoacán (Mexico), Turin (Italy), Bucharest (Romania), Siegen and Wuppertal (Germany), Sao Paulo (Brazil), and Nijmegen (Netherlands). After the measurement phase, the experiment is presently being dismantled. The data taken, however, are still analyzed in detail to study several aspects of astroparticle physics.