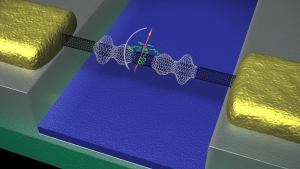 The spin of a molecule (orange) changes and deforms the nanotube (black) mounted between two electrodes (gold). (Figure: C. Grupe/KIT)

Carbon nanotubes and magnetic molecules are considered building blocks of future nanoelectronic systems. Their electric and mechanical properties play an important role. Researchers of Karlsruhe Institute of Technology and French colleagues from Grenoble and Strasbourg have now found a way to combine both components on the atomic level and to build a quantum mechanical system with novel properties. It is reported now in the print version of nature nanotechnology journal (DOI: 10.1038/nnano.2012.258).

In their experiment the researchers used a carbon nanotube that was mounted between two metal electrodes, spanned a distance of about 1 µm, and could vibrate mechanically. Then, they applied an organic molecule with a magnetic spin due to an incorporated metal atom. This spin was oriented in an external magnetic field.

“In this setup, we demonstrated that the vibrations of the tube are influenced directly when the spin flips parallel or antiparallel to the magnetic field,” explains Mario Ruben, head of the working group at KIT. When the spin changes, the resulting recoil is transferred to the carbon nanotube and the latter starts to vibrate. Vibration changes the atomic distances of the tube and, hence, its conductance that is used as a measure of motion.

The strong interaction between a magnetic spin and mechanical vibration opens up interesting applications apart from determining the states of motion of the carbon nanotube. It is proposed to determine the masses of individual molecules and to measure magnetic forces within the nano-regime. Use as a quantum bit in a quantum computer might also be feasible.

According to the supplementary information published in the same issue of nature nanotechnology such interactions are of high importance in the quantum world, i.e. in the range of discrete energies and tunnel effects, for the future use of nanoscopic effects in macroscopic applications. Combination of spin, vibration, and rotation on the nanoscale in particular may result in entirely new applications and technologies.

The online version of the print paper:
http://www.nature.com/nnano/journal/v8/n3/full/nnano.2012.258.html

The homepage of the research group at KIT can be found at:
http://www.ruben-group.de/