One Year after Fukushima 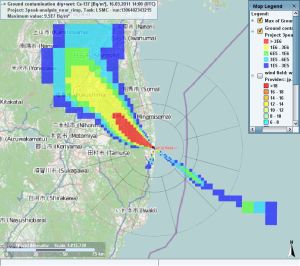 The Fukushima disaster happened one year ago – the impacts are not over yet, neither in Japan nor in Germany. Immediately after the reactor accident became known, KIT established working groups that are still processing scientific findings for the public. Meanwhile, the KIT Energy Center is supporting the energy turnaround in Germany by conducting research into energy efficiency, storage technologies, smart grids, electromobility, and renewable energies.

During the first days after March 11, 2011, news came thick and fast as did the media’s and population’s requests for expert information. “After about one week, discussion was brought onto a more objective level,“ says Dr. Joachim Knebel, Chief Science Officer of KIT and Spokesperson of the Nuclear Safety Research Programme of the Helmholtz Association. This was not least due to the six working groups established under the direction of KIT on behalf of the Helmholtz Association and in agreement with the Federal Ministry of Education and Research to assess and process the incidents in Japan. In the first three months after the crisis, the about 30 researchers involved sometimes worked all around the clock. Among others, the working groups analyzed the degree of destruction of reactor components, the sequence of the accident, and the energy release in the reactor cores. They prognosticated further accident development, made dispersion calculations, and assessed the impacts of radioactive emissions on the people in Japan. Presently, they are focusing on the reconstruction and physical understanding of the accident sequence. In cooperation with the Gesellschaft für Anlagen- und Reaktorsicherheit (GRS) and experts from the USA and Japan, the scientists collected all data available and, on this basis, tried to determine the current status and predict further development. “Our calculations of soil contamination with cesium, for instance, turned out to be true throughout,“ says Wolfgang Raskob, who made daily prognosis computations with his team.

The working groups published their results on KIT’s web site at http://www.kit.edu/visit/6042.php. From March 2011 to January 2012, this site was accessed nearly 54,000 times. “The graphics illustrating our dispersion calculations were even used as independent information in Japan“, says Knebel. Until mid-April 2011, KIT received about 300 documented inquiries. At the same time, more than 270 articles in online media, more than 150 articles in printed media, more than 50 TV clips, and more than 80 radio segments reported about the work of the Helmholtz researchers at KIT after Fukushima.

In addition, persons staying in the North of Japan when the reactor accident happened were offered the service of undergoing a body counter measurement to detect potential incorporation of radioactive substances at KIT’s In-vivo Measurement Laboratory. At the end of last year, a delegation of the Japan Atomic Energy Agency visited KIT to inform itself about reactor safety research conducted here and to conclude an agreement for extended cooperation.

Current Situation at Fukushima
In the surroundings of the Fukushima nuclear power plant, the Japanese are presently trying to prepare decontamination of several hundred square kilometers of soil. “Removal of an about 5 cm thick soil layer is to reduce radioactive contamination to less than the threshold value of 5 millisievert,” explains Wolfgang Raskob from KIT’s Institute for Nuclear and Energy Technologies (IKET). “So far, such measures have been taken at kindergartens, schools, hospitals, and similar institutions.“ However, a long-term solution still remains to be found for the disposal of the earth removed. The plant itself is presently being enclosed by a protective construction of steel frames with polyester panels for gas-tight sealing of the reactors. Steel walls driven about 23 meters into the underground are to prevent radioactively contaminated water from leaving the reactors and entering the sea or groundwater. “Meanwhile, the cooling circuits are working again,“ Raskob says. Debris and scrap will be removed gradually from the site. Then, the plant will be dismantled and/or the areas of highest radioactivity will be buried in a sarcophagus.

Nuclear Safety Research at KIT
“The nuclear engineering competence existing at KIT will also be required in future times of an energy turnaround. It will be necessary to develop solutions for a safe and responsible disposal of radioactive wastes and to implement them,“ emphasizes Joachim Knebel. In his opinion, Germany will continue to need the pertinent know-how to assess the safety of nuclear power plants in other countries, as the consequences of accidents do not stop at national borders, and to remain in the position to discuss safety matters in international committees.

Karlsruhe Institute of Technology (KIT) is one of Europe’s leading energy research establishments. The KIT Energy Center pools fundamental research with applied research into all relevant energy sources for industry, households, services, and mobility. Holistic assessment of the energy cycle also covers conversion processes and energy efficiency. The KIT Energy Center links excellent competences in engineering and science with know-how in economics, the humanities, and social science as well as law. The activities of the KIT Energy Center are organized in seven topics: Energy conversion, renewable energies, energy storage and distribution, efficient energy use, fusion technology, nuclear power and safety, and energy systems analysis.
Research, education, and innovation at KIT foster the energy turnaround and reorganization of the energy system in Germany. Clear priorities lie in the areas of energy efficiency and renewable energies, energy storage technologies and grids, electromobility, and enhanced international cooperation in research.