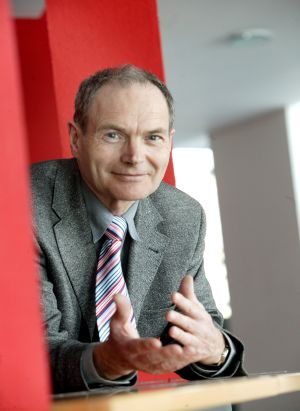 The physicist Professor Hilbert von Löhneysen from Karlsruhe Institute of Technology (KIT) is granted this year’s Hector Research Award and now is a so-called Hector Fellow. With its award, the Hector Foundation II with its office at Weinheim acknowledges pioneer research achievements of scientists. This year, the Hector Research Award in the amount of EUR 150,000 each is granted to three outstanding scientists from excellent German universities. Apart from von Löhneysen, these are Professor Axel Meyer (University of Constance) and Professor Nikolaus Pfanner (University of Freiburg).


The awards ceremony took place at the Europäischer Hof hotel, Heidelberg, in the presence of the Baden-Württemberg Minister of Science, Research, and the Arts, Theresia Bauer. Dr. h.c. Hans-Werner Hector emphasized that von Löhneysen, Meyer, and Pfanner decisively shape the future with their work: “The scientists are characterized by the will to make the unconceivable conceivable and to make it become reality through results. They are trendsetters in their discipline and widely renowned personalities of science.”

The physicist Hilbert von Löhneysen has been conducting research and teaching at KIT since 1986. He is professor at the Physikalisches Institut of Karlsruhe Institute of Technology (KIT) and in parallel, he is heading the Institute for Solid-State Physics. Von Löhneysen is entering entirely new ground by research into so-called quantum effects in metals. Quantum phase transitions can be detected in the laboratory at very cold temperatures, i.e. near absolute zero at minus 273°C, high pressures, and high magnetic fields. The physicist studies transitions between the states in these materials, e.g. the transition from conducting to isolating and from magnetic to unmagnetic. Doing this, von Löhneysen discovered a new type of these quantum phase transitions. The corresponding effects result in remarkable properties that may be highly advantageous to electrical contacts and construction elements.

Von Löhneysen also investigates metallic nanostructures with special interactions of electrons. Ten years ago, von Löhneysen and his team succeeded in contacting individual molecules and measuring electric current flow through them. Presently, he and his team are studying contacts of metals in which electrons behave completely differently, for instance, contacts between superconductors and magnets. Nanoelectronic components on this basis may result in novel high-performance computer systems based on quantum effects in the future.

“We are very pleased that also this year a scientist of KIT has been appointed a Hector Fellow,” emphasize KIT Presidents Horst Hippler and Professor Eberhard Umbach. “Hilbert von Löhneysen is an excellent personality in research and education, and this award also is a big honor for KIT.” At the awards ceremony in Heidelberg, Horst Hippler accepted the award, as von Löhneysen could not attend, since he chaired the meeting of the Council of Science and Humanities of the Federal Republic of Germany in Berlin on that day. 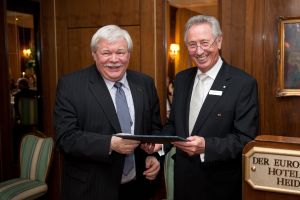 Professors von Löhneysen, Meyer, and Pfanner are now Hector Fellows, which means that they are members of a team of specialists who are jointly working on scientific topics. By granting the annual award since 2009, the donors Josephine and Hans-Werner Hector wish to enhance mutual support of the laureates, who are to give the public a better understanding of natural sciences.