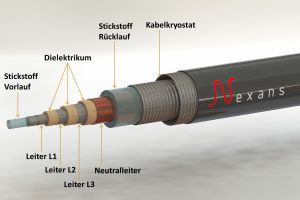 In order to reach its ideal conducting temperature, the superconducting cable is cooled with liquid nitrogen. (Photo: Nexans)

The “AmpaCity” project has been kicked off: The RWE Group and its partners are just about to replace a 1-kilometre-long high-voltage cable connecting two transformer stations in the Ruhr city of Essen with a state-of-the-art superconductor solution. This will mark the longest superconductor cable installation in the world. As part of this project, the Karlsruhe Institute of Technology will analyse suitable superconducting and insulating materials.

The three-phase, concentric 10 kV cable will be produced by Nexans and is designed for a transmission capacity of 40 megawatts. This installation will also be the first to combine a superconducting cable with a resistive superconducting fault current limiter for overload protection. The limiter will be manufactured by Nexans unit specialized in superconductors, located in Hürth, Germany.

The project could herald a whole new dimension in the restructuring of inner-city networks. Following the successful completion of a two-year field test, it would be possible to install 10 kV superconducting links in large sections of the backbone of the Essen distribution network as part of efforts to release from high-voltage installations. In the medium term, this would lead to greater efficiency as well as lower operating and maintenance costs while simultaneously reducing land use. The dismantling of numerous 110/10 kV transformer stations would help to free up valuable space in inner-city areas. Thanks to the distinctive nature and ambitions of AmpaCity, the project is being supported by the energy research department of the Federal Ministry of Economics and Technology (BMWi).

The project was preceded by a detailed study in which a number of research institutes, under the leadership of the Karlsruhe Institute of Technology, worked alongside with the project partners Nexans and RWE to analyse the technical feasibility and economic efficiency of a superconductor solution at medium-voltage level. The study revealed that superconducting cables are the only reasonable alternative to high-voltage cables in city networks and that their use would mean that resource- and land-intensive transformer stations could be demolished. Although copper medium-voltage cables could also be used in inner-city areas to transmit high power, the cost efficiency of this solution would be cancelled out by the much higher ohmic drop. Furthermore, conventional medium-voltage cables for the Essen project are also out of question, as they require much more routing space: instead of a single 10 kV superconductor cable, five copper cables would need to be laid in parallel – often a largely impossible task given the limited space under the city streets.

State-of-the-art high-temperature superconductors (cooled with liquid nitrogen) such as those used in AmpaCity have been ready for deployment in energy-related applications for some years now, although they have yet to be used on a large scale. Thanks to improved production processes, superconducting wires are only now available in sufficient lengths and quantities. Superconductivity is an efficiency technology because it helps to protect material and energy resources. Experts anticipate that these innovative cables will soon be in a position to compete with copper solutions in energy-intensive applications. The BMWi understands superconducting equipment as an important component of future energy supply concepts.

The technical predominance of superconducting cables can be attributed to the material properties of the conductor. At temperatures of around -200°C, the material is transformed into an almost perfect electrical conductor being able to transport at least 100 times more electricity than copper. Despite the cooling jacket, the compact design of the superconductor means that it can transport five times the electricity as a similarly sized copper cable – and with much fewer electrical losses.

RWE Deutschland AG
RWE Deutschland AG, which is headquartered in Essen, is responsible for sales and distribution network activities in Germany as well as for the gas storage facilities in the RWE Group for electricity, gas and water. It manages the regional RWE companies in Germany and also develops innovations in the field of energy efficiency, including electromobility and intelligent networks. RWE Deutschland has interests in some 70 regional and municipal utilities and employs around 21,000 people. More information on  www.rwe.com .