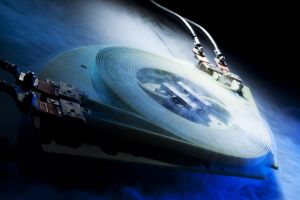 For the first time, a superconducting current limiter based on YBCO strip conductors has now been installed at a power plant. At the Boxberg power plant of Vattenfall, the current limiter protects the grid for own consumption that is designed for 12 000 volts and 800 amperes against damage due to short circuits and voltage peaks. The new technology co-developed by Karlsruhe Institute of Technology and made by Nexans SuperConductors enhances the intrinsic safety of the grid and may help reduce the investment costs of plants.

“For a long time, high-temperature superconductors were considered to be difficult to handle, too brittle, and too expensive for general industrial applications,” explains project manager Wilfried Goldacker from Karlsruhe Institute of Technology. “The second generation of high-temperature superconductor wires based on YBCO ceramics is much more robust. Properties have been improved.” Superconducting current limiters work reversibly. In case of current peaks after short circuits in the grid, no components are destroyed. The limiter automatically returns to the normal state of operation after a few seconds only. Consequently, the power failure is much shorter than in case of conventional current limiters, such as household fuses, whose components are destroyed and have to be replaced with a high time and cost expenditure.

“Superconducting current limiters have a number of advantages for the stability of medium- and high-voltage grids,” explains Mathias Noe, Head of the Institute of Technical Physics of Karlsruhe Institute of Technology. Reliable, compact current limiters enhance the operation stability of power grids and allow for a simplification of the grid structure. As they are protected against current peaks, decentralized energy generators, such as wind and solar systems, can be integrated much better in grids. Expensive components in the existing grid are protected efficiently, components in future grids can be designed for smaller peak currents, and transformers will no longer be necessary. Investment costs of power plants and grids will be reduced. Moreover, superconducting current limiters on the basis of YBCO can also be applied in high-voltage grids of more than 100 kilovolts for better protection against power failures in the future.

The superconducting current limiter was developed in the past two years under the ENSYSTROB project. The project partners are Karlsruhe Institute of Technology, Nexans SuperConductors, TU Dortmund, and BTU Cottbus. The field test will be carried out at the user, the Vattenfall utility company. The project was funded with about EUR 1.3 million by the Federal Ministry of Economics. The results of the project are of high relevance, as the functionality of current limitation may be integrated in superconducting transformers and energy cables in the future.