On the Death of Professor Heinz Kunle 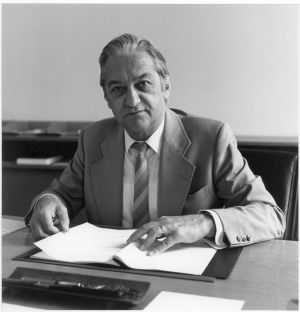 Professor Heinz Kunle was rector of the former Universität Karlsruhe from 1983 to 1994. (Photo: Thilo Mechau)

The former Rector of Universität Karlsruhe, Professor Heinz Kunle, died last Thursday, January 05, at the age of 83. Between 1983 and 1994, Kunle made the Fridericiana reach a top position in research. For a long time, he was Vice President of the German Rectors Conference. The professor of mathematics was particularly committed to international cooperation. The pioneer of the German-French University rendered outstanding services to German-French cooperation in the university sector.

“With Professor Kunle, we do not only lose a highly committed former rector, but also a charismatic university teacher, an excellent scientist, and an outstanding personality,” says KIT President Professor Horst Hippler.

Heinz Kunle started to teach and conduct research at Universität Karlsruhe as a professor of geometry in 1962. From 1965 to 1967, he was dean for the former Department of Natural Sciences I. From 1970 to 1975, he was Vice Rector. As a rector, Kunle managed the university between 1983 and 1994. During this time, the Fridericiana made an enormous step forwards in research: The number of collaborative research centers funded by the German Research Foundation increased from three to ten, third-party funding more than doubled. Kunle also strived to improve university education. He
established the Division of Didactics of Mathematics in order to attract the best students for teaching at schools.

Apart from research and education, Kunle attached high importance to international cooperation with Hungary, Bulgaria, and Russia, and in particular with France. He established a number of partnerships that resulted in study courses and double diploma programs. After his retirement, he continued to work for German-French university cooperation and was one of the pioneers of the German-French University founded in Saarbrucken in 1999.

Since 2000, Kunle has also chaired the University Council of the University of Education, Karlsruhe. Apart from three honorary doctorates, Kunle was awarded the Cross of Merit, First Class, the Medal of Merit of the State of Baden-Württemberg, and the honor of Chevalier de la Légion d’Honneur (Knight of the French Legion of Honor).