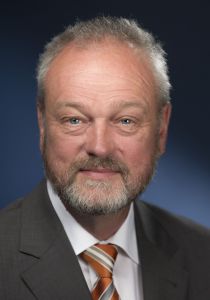 The Presidial Board of the Deutsches Institut für Normung e.V. DIN has admitted Dr. Karl-Friedrich Ziegahn, Chief Science Officer of KIT, to the Waldemar-Hellmich-Kreis. This was announced during a DIN celebration yesterday. The Honorary Senate of DIN has a maximum of 50 members, including former presidents of large research organizations and former board members of companies. The Waldemar-Hellmich-Kreis was established in 1957 and named after the founder of DIN. The members admitted to this group are persons, who promoted standardization during their professional work.

“Admittance to the Waldemar-Hellmich-Kreis is a great honor for me,” said Ziegahn. “I consider this a recognition of my long work in bodies and committees for national and international standardization.” According to Ziegahn, standardization work always is very instructive and gainful. “I can highly recommend young scientists to be active in this area.”

“Dr. Ziegahn has always analyzed all problems holistically and linked research and education with the benefits and tasks of standardization,” said the President of DIN, Professor Klaus Homann, in his laudation. “He always advocates the idea of research having to participate in standardization work at an early point of time in order to make the results of research available to the broad interested public in the form of accepted rules of technology.”

The Honorary Senate of DIN recommends further developments of standardization. The registered non-profit association DIN was established in 1917. It is the most important standardization organization in Germany. To develop standards for industry, the state, and society, which meet market requirements, some 28,000 experts contribute their skills and experience. Nearly 90% of the standards work currently carried out by DIN are of European and international nature.

Dr.-Ing. Karl-Friedrich Ziegahn, born in 1952, is graduated physicist and Chief Science Officer (CSO) of KIT. He studied and was awarded his doctorate at the former Universität Karlsruhe (TH). From 1980, Ziegahn worked at the Fraunhofer Institute for Chemical Technology (ICT), first as a member of the scientific staff, then as Deputy Head of the Department of Environmental Engineering and Head of the Central Management. In 2006, Dr. Ziegahn was appointed Head of the Energy, Environment, and Atmosphere Research Programs of Forschungszentrum Karlsruhe GmbH, today’s Campus North of Karlsruhe Institute of Technology (KIT). Since 2011, Ziegahn has been Chief Science Officer of KIT. He is Chairman of the Supervisory Board of the European KIC InnoEnergy SE, a consortium of universities, research institutions, and industrial companies under the roof of the European Institute of Innovation and Technology EIT. He is spokesman of the Helmholtz Association for bioenergy as well as co-coordinator of the Helmholtz “Sustainable BioEconomy” alliance. Ziegahn is President of the Society for Environment Simulation (GUS), Chairman of the Karlsruhe Geothermal Energy Center (GTZ), and was President of the Confederation of European Environmental Engineering Societies (CEEES).