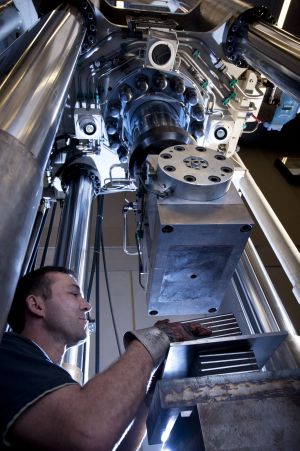 Materials sciences and mechanical engineering – only two of five subjects, in which KIT is top in Germany. (Photo: Irina Westermann)

Of all German universities, Karlsruhe Institute of Technology (KIT) is top in engineering (place 57 worldwide) and natural sciences (place 55 worldwide). The “2012 Performance Ranking of Scientific Papers for World Universities” measures research performance of universities based on scientific publications.

The “Performance Ranking of Scientific Papers for World Universities“ is the successor of the “Higher Education Evaluation and Accreditation Council of Taiwan“ (HEEACT) ranking that has been published annually since 2007. This new performance ranking has been issued by the National Taiwan University for departments and subjects since 2011. It considers universities and is based exclusively on the analysis of scientific publications. Evaluation of publications and citations does not only cover the past year, but considers a period of up to eleven years. The basis are publication data of the Web of Science (WoS) and Essential Science Indicators (ESI) (both Thomson Reuters).