Seismometer Tested for Use on the Moon and Mars 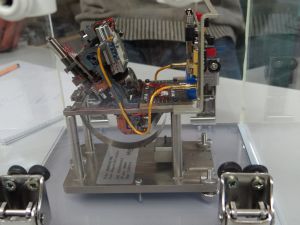 VBB seismometers, such as this prototype, are tested at the Black Forest Observatory for use on the moon and mars. (Photo: Rudolf Widmer-Schnidrig)

The SELENE2 international mission is aimed at studying local moonquakes as well as gravitation accelerations of the earth and moon. For this purpose, several seismometers will be installed on the moon. These devices were developed by an international team of researchers. Their tests by scientists of the Black Forest Observatory Schiltach (BFO), a joint facility of Karlsruhe Institute of Technology (KIT) and Stuttgart University, will be completed on Friday, July 20. In addition to this moon mission, the devices will also be used during the NASA’s Insight mission on the Mars.

Time and again, local quakes occur on the moon. Knowledge of their origin and intensity is required for the safe construction of moon bases for astronauts or for drawing conclusions with respect to the inner structure of the moon. To study moonquakes and the effects of gravitation accelerations, a set of several seismometers is planned to be installed on the surface of the moon during the SELENE2 Japanese moon mission.

The key component of this geophysical mission is a new very broad-band (VBB) seismometer developed by scientists of the Institut de Physique du Globe (IPGP), Paris, in cooperation with ETH Zurich and the Max Planck Institute for Solar System Research. The VBB seismometer is to cover the complete signal spectrum from highly frequent local moonquakes to gravitation accelerations of the earth and moon. In addition, three short-period seismometers of the Japanese Aerospace Exploration Agency (JAXA) will be used to measure highly frequent quakes in all three spatial directions. The VBB seismometer will also be applied on the Mars during the Insight mission of the American Space Agency NASA. The astronauts will use the devices to observe marsquakes, response accelerations of the planet possibly caused by quakes or turbulences in the Mars atmosphere, and the gravity effect of the Mars satellite Phobos.

Until Friday, July 20, constructors of the SELENE2 mission (IPGP, JAXA, MPS) will test the moon seismometers at the Black Forest Joint Observatory (BFO), a facility of KIT and Stuttgart University. “Test conditions at BFO are unique worldwide,” says KIT scientist and BFO employee Dr. Thomas Forbriger. Due to its remote location in a closed mine, the observatory is one of the calmest stations of the global seismological network, which is hardly influenced by disturbances. “Moreover, the BFO, with its instruments that have been operated for a long time already, defines the sensitivity that can be achieved for seismic measurements on earth. The BFO instruments are considered the standard for all newly developed measurement instruments worldwide.” On Tuesday, July 17, and Wednesday, July 18, the seismometers will be installed in a vacuum chamber to simulate conditions on the moon and test the devices for their suitability.

The SELENE2 mission is planned to follow geophysical studies under the APOLLO program: Between 1969 and 1972, astronauts installed a seismometer network on the moon surface in order to detect quakes. According to the results, there are four different types of moonquakes: Quakes at around 700 km below the moon surface, effects of comet or asteroid impacts, eruptions caused by rapid heating of the surface, and moonquakes 20 to 30 kilometers below the moon surface.

As the VBB seismometer possesses a much higher sensitivity than the instruments used during the APOLLO mission, scientists hope to gain new insights into the inner structure of the moon and the Mars, which may help determine the size and composition of the moon or Mars core or the detailed mantle structure.

The Black Forest Joint Observatory is a facility of KIT and Stuttgart University. At the observatory, scientists study and optimize geophysical observation methods and the instruments used for this purpose and they investigate natural oscillations of the earth to determine material properties deep inside.