By Electricity, Researchers Switch the Magnetic State and Electric Resistance of a Single Molecule on and off/Blueprint for Novel, Compact Storage Media 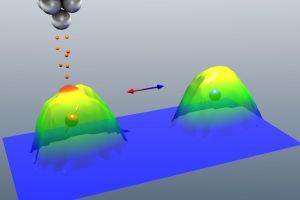 One bit of digital information stored on a hard disk currently consists of about 3 million magnetic atoms. Researchers from Karlsruhe, Strasbourg, and Japan have now developed a magnetic memory with one bit per molecule. By an electric pulse, the metal-organic molecule can be switched reliably between a conductive, magnetic state and a low-conductive, non-magnetic state. This novel correlation for molecules is now reported in the Nature Communications journal.
(doi: 10.1038/ncomms1940)


“The superparamagnetic effect prevents smaller bit sizes from being reached in a hard disk,“ explains Toshio Miyamachi, first author of the study and researcher at the Center for Functional Nanostructures (CFN) of Karlsruhe Institute of Technology (KIT). This superparamagnetic effect implies that magnetic memory crystals are increasingly susceptible to thermal switching with decreasing size. Consequently, information may soon be lost. “We chose another approach and placed a single magnetic iron atom in the center of an organic molecule consisting of 51 atoms. The organic shell protects the information stored in the central atom.” Apart from the ultimate density of one bit per molecule, this type of memory based on so-called spin crossover molecules also has the advantage of the writing process being reliable and purely electric.

“Using a scanning tunneling microscope, we applied defined electricity pulses to the nanometer-sized molecule,” adds Wulf Wulfhe-kel, head of the research group at KIT’s Physikalisches Institut. “This reproducibly changes not only the magnetic state of the iron, but also the electric properties of the molecule.” Hence, the two magnetic configurations lead to varying conductances, such that the magnetic state of the molecule can be determined easily by a simple resistance measurement.

The present study reports the fundamentals and shows the principle feasibility and advantages of memories consisting of spin crossover molecules. “These memristive and spintronic properties combined in a molecule will open up a new field of research,” the researchers are convinced. Memristors are memories that store information in the form of resistance variations. Spintronics uses the magnetic spin of individual particles for information processing.

Work was carried out at the laboratories of the Center for Functional Nanostructures (CFN) of KIT, the Institut de Physique et Chimie des Matériaux (IPCMS) in Strasbourg, the SOLEIL synchrotron in Paris, and the Chiba University, Japan.