With the Development of an Energy-efficient Supercomputer, KIT Students Twice Reached the First Place and Once the Second Place in the Final of the Student Cluster Competition 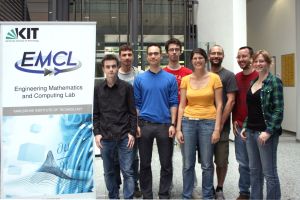 The “kluster” team of students of Karlsruhe Institute of Technology (KIT) reached a triple success in the Student Cluster Competition. It ranked in first place for the Linpack Benchmark in the category of pure CPU clusters, i.e. for main processors, won another first place in the category of “Best Presentation of the Team”, and ranked second in the Linpack Benchmark for general clusters. In the IT sector, benchmarks are systems to evaluate the efficiency of computer systems for various applications. The KIT team was the only European team competing against two teams from the USA and two teams from China. The task was to construct an energy-efficient supercomputer of highest performance.


Developing energy-efficient supercomputers for various applications – this was the task to be fulfilled by the teams of students taking part in the Student Cluster Competition. The KIT group was the only European team that qualified for this competition. In Hamburg, it competed against two teams from the USA and two teams from China. Due to their repeated participation in earlier competitions, the latter competitors were considered highly experienced. “And the greater was the success for our team,” says the kluster supervisor Eva Ketelaer.

The KIT team won two first places for the Linpack Benchmark in the category of pure CPU clusters, i.e. main processors, and in the category of “Best Presentation of the Team”. The “kluster” group reached rank two for the Linpack Benchmark for general clusters. In the IT sector, benchmarks are evaluation systems to assess the runtime of applications in various computer systems.

Work of the students of mathematics, informatics, and physics to develop a supercomputer of maximum performance and high energy efficiency started last autumn. The supercomputer was not to exceed an electricity consumption of 3000 Watts. In addition, various applications were given, including simulations in flow mechanics for oceanography and the prognosis of ice drifts. Professor Vincent Heuveline, Head of the Engineering Mathematics and Computing Lab (EMCL) of KIT, and other partners from industry supported the students. “I am very proud of the motivation and enthusiasm of our students in mastering this complex task,” emphasizes Vincent Heuveline. “This competition enriches the education of our students. It enhances the interest of our young scientists in supercomputing and computational science and engineering.”

The Student Cluster Competition in high-performance computing took place at the “International Supercomputing Conference” (ISC) in Hamburg. The German ISC and the American Supercomputing that take place annually are the most important conferences for high-performance computing worldwide. At these conferences, the 500 most rapid supercomputers (top 500), a list that is updated every six months, are announced. For several years now, the Student Cluster Competition has taken place regularly at the Supercomputing in the USA. Here, teams of students compete with supercomputers designed on their own. The international competition is orga-nized by the HPC Advisory Council, an organization for research, counseling, and education in supercomputing.