Toward a Better Understanding of Earthquakes 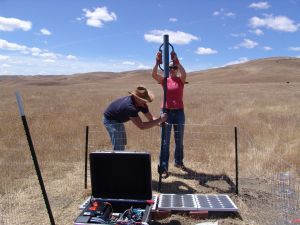 The earth is shaken daily by strong earthquakes recorded by a number of seismic stations worldwide. Tectonic tremor, however, is a new type of seismic signal that seismologist started studying only within the last few years. Tremor is less hazardous than earthquakes and occurs at greater depth.  The link between tremor and earthquakes may provide clues about the more destructive earthquakes that occur at shallower depths. Geophysicists of Karlsruhe Institute of Technology (KIT) collected seismic data of tectonic tremor in California. These data are now being evaluated in order to better understand this new seismic phenomenon.

About a decade ago, researchers discovered a previously unknown seismic signal, now referred to as tectonic tremor. Contrary to earthquakes, tectonic tremor causes relatively weak ground shaking.  While tremor may last longer than earthquakes, it does not cause any direct danger. “Both earthquakes and tremor have the same cause. They result from the relative movement on fault surfaces, a result of the motion of the tectonic plates,” explains seismologist Dr. Rebecca Harrington, who heads a research group at KIT. “While earthquakes at our research site in California typically occur at depths of up to 15 km below the surface, tectonic tremor signals are generated at depths ranging from approximately 15 to 35 km.”

Tectonic tremor was first detected a decade ago in subduction zones in Japan and in the Pacific Northwest in North America. Since then, seismologists have discovered that tremor occurs in many other places, including the San Andreas fault in California. The San Andreas fault marks the boundary where the Pacific Plate and the North American plate drift past each other, generating many earthquakes in the process.  KIT researchers have collected new seismic data recording tremor closer to where it occurs than the seismic stations currently installed near Cholame. In mid-2010, KIT researchers, together with scientists of the University of California, Riverside, and the US Geological Survey, Pasadena, installed 13 seismic stations near Cholame, located approximately halfway between San Francisco and Los Angeles. Each seismic station was equipped with a broadband seismometer in a thermally insulated hole in the ground, a small computer, and a solar panel for power. Broadband seismometers  are extremely sensitive to small ground motions, are therefore ideal for detecting tremor and small earthquakes.  The data recorded over a period of 14 months are presently being analyzed at KIT.

Tectonic tremor signals have a unique character that differs from earthquakes, making them more difficult to detect using automated techniques. In order to address the detection problem, the KIT researchers first developed a new algorithm for the automatic isolation of tectonic tremor. Using their new technique, they found over 2600 tremor events that are now being studied in detail. “In addition to detecting tremor, we will determine their size or magnitude of the individual events.  In order to do so, each of the tremor events must be precisely located,” says Rebecca Harrington. Additionally, KIT geophysicists compare the tremor and earthquake recordings in California with earthquake recordings at Mount St. Helens volcano, located in the Cascadia subduction zone, located to north of California, in the US state of Washington. A volcano eruption from 2004-2008 produced a series of earthquakes on newly formed faults, where the scientists of the US Geological Survey collect data that are also made available to Rebecca Harrington.

Seismology is still a long way from being able to predict earthquakes. However, seismologists can better estimate the danger posed by earthquakes by understanding what happens on a fault during a seismic event. According to Rebecca Harrington, research of tectonic tremor may play an important role understanding fault behavior. “We understand very little about what happens on a fault when it ruptures. The tectonic tremor generated on the deep part of a fault may provide clues about the behavior on the more shallow parts of a fault where more damaging earthquakes occur.”