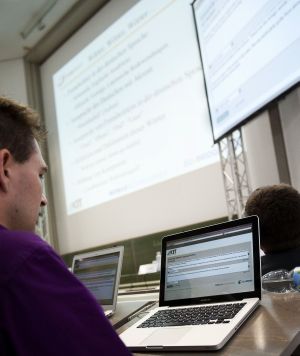 Internationalization makes universities face linguistic challenges: Do they have to provide their lectures in English or do all foreign students have to learn German? An alternative solution has been developed by the Institute of Anthropomatics of Karlsruhe Institute of Technology (KIT): The first computer-based automatic simultaneous translation service at a university worldwide. Today, Professor Alex Waibel and his team presented the system on KIT Campus South.


“The automatic lecture translator is the result of long years of excellent research that will be of benefit to teaching. Hopefully, generations of students worldwide will profit from it soon,” said Theresia Bauer, Minister of Science, Research, and the Arts of the state of Baden-Württemberg during the presentation of the translator. “The translator marks a major step when considering the increasing heterogeneity of our students that is to be managed by us as a cosmopolitan place of knowledge.”

“At KIT, we have about 16% of foreign students. At universities in the USA, this share amounts to about 50%,” says KIT President Professor Horst Hippler. “In international competition for the best scientists, we are still behind.” The lecture translator is aimed at helping attract talented students from abroad. It is part of the efforts undertaken by KIT to overcome language barriers. ”The lecture translator automatically records the lecture, transcribes the text into a written version, and translates it into English in real time,” says Professor Alex Waibel. “Students can then follow the lecture via their PC or mobile phone.” The translator also translates transparencies presented during the lecture. Past lectures on the PC can be found and accessed via search terms in the written versions.

The lecture translator combines the technologies of automatic speech recognition and statistic machine translation in an integrated system. Auxiliary components structure the text, deal with punctuation, treat German compound words, record the lecture, and display the translation result. The components are combined by an innovative service infrastructure.

“The translation is not always perfect,” says Waibel, “but it is part of the language tools, by means of which students are enabled to better follow the lectures in spite of language barriers.“ Presently, the lecture translator is being tested during lectures of the Departments of Informatics and Mechanical Engineering at KIT. In the future, it is planned to offer several languages for selection and to support a larger number of lectures. Not only foreign students, but also hearing-impaired persons will profit.

The lecture translator is the result of two decades of research conducted by Alex Waibel and his scientific and commercial partners. These are in particular the Carnegie Mellon University, Pittsburgh, and Mobile Technologies LLC & GmbH. Work is also financed from funds of the European Commission and the German Excellence Initiative.