More Freedom of Discretion for KIT 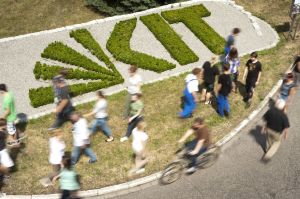 Karlsruhe Institute of Technology (KIT) will be granted more autonomy and far more freedom of discretion. Today, the Baden-Württemberg state parliament adopted the KIT Further Development Act, as a result of which KIT will be principal of its civil servants and employer of its employees in the future. In addition, KIT will have the right to make appointments in its own responsibility. It will be granted considerable autonomy to adopt own statutes and become the owner of its movable properties.

“This is a consistent next step for the further development of KIT. Our thanks go to the state and federation for their committed and courageous implementation of the basic elements agreed upon in the KIT Further Development Act,” emphasize KIT Presidents Professor Eberhard Umbach and Professor Horst Hippler. “These new larger scopes of action perfectly support KIT’s way towards an internationally visible top institution in research, education, and innovation. They will also strengthen our position in the competition for the best experts worldwide.”

“KIT is the first example of a real merger of a university and a research institution in Germany. We want to continue this success story by the KIT Further Development Act adopted today,” says the Baden-Württemberg Minister of Science, Research, and the Arts, Theresia Bauer.

The state’s supervisory control of the university sector will be abolished largely. KIT will continue to be a public corporation, but ceases to be a state institution. The funds from the state and federal budgets will be allocated to KIT and can be disposed of autonomously by KIT to fulfill its missions. At the same time, KIT will become the owner of its assets to a large extent. Apart from the special large-scale research fund, the movable properties of the university sector will be transferred to KIT. For a test phase of five years, KIT will be allowed to execute construction projects on its Campus for Mobility and Innovation in its own responsibility.

With the entry into force of the Further Development Act, KIT will become the principal of its civil servants and employer of its employees. Transfer of the staff from the state to KIT is envisaged to take place on January 01, 2013. Rights of staff already employed will be preserved fully. Moreover, KIT will be free to set up and adopt statutes relating to equal opportunities and gender equality.

Participation of Employees and Students
In the future, the Staff Council will participate in the appointment of supervisory board members and have the right to propose a candidate to the finding commission. The Staff Council will be represented in the senate by one member having voting power.

A convention of academic and scientific employees will be established to discuss matters and aspects relating to KIT and make recommendations to the KIT bodies.