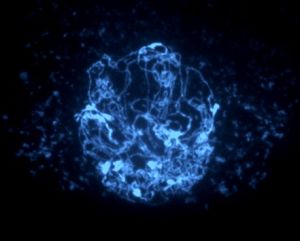 Leptotene stage during the meiosis of germ cells in thale cress: Halving of the number of the chromosomes is accompanied by a recombination of hereditary information. (Photo: Botanical Institute II, KIT)

Scientists of KIT and the University of Birmingham have identified relevant new functions of a gene that plays a crucial role in Fanconi anemia, a life-threatening disease. The FANCM gene is known to be important for the stability of the genome. Now, the researchers found that FANCM also plays a key role in the recombination of genetic information during inheritance. For their studies, the scientists used thale cress as a model plant. Their results are newly published by the journal The Plant Cell.

Stability of the genome is ensured by a series of mechanisms. If these are lacking, the risk of cancer and other severe diseases is increased. Fanconi anemia is a recessive hereditary disease associated with dysplasia, degeneration of bone marrow, and an increased risk of leukemia and tumors. FANCM is one of the genes responsible for Fanconi anemia. So far, the deactivation of FANCM has been known to lead to genome instability in somatic cells, i.e. body cells that are not involved in reproduction. “We have now proven that FANCM does not only ensure genome stability in somatic cells, but also controls inheritance,” explains Dr. Alexander Knoll from the Botanical Institute II of KIT, first author of the publication in The Plant Cell.

According to the findings, FANCM plays a key role in the combination of paternal and maternal traits in the germ cells. The gene can be detected in nearly all organisms, from bacteria to yeast to plants to man. For their studies, the researchers from Karlsruhe and Birmingham used thale cress (Arabidopsis thaliana) as a model organism. The genome of this plant belonging to the family of cruciferous plants is relatively small and completely sequenced. The researchers found that the FANCM-homologous gene At-FANCM ensures ordered distribution and recombination of the genetic material during the meiosis of the germ cells in thale cress. “These findings cannot only be applied in biomedicine, but also in plant breeding in order to specifically improve the properties of usable crops,” explains the Head of the Botanical Institute II of KIT, Professor Holger Puchta.