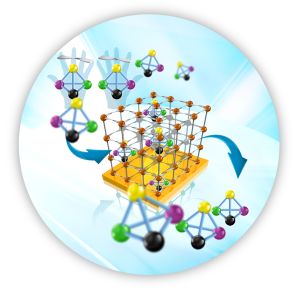 A molecular framework anchored to a surface separates the enantiomers desired. (Graphics: KIT-IFG)

Researchers of Karlsruhe Institute of Technology (KIT) and Ruhr-Universität Bochum (RUB) have developed a flexible and efficient new process for the separation of enantiomers. Enantiomer separation is indispensable for the production of many pharmaceuticals. In their process, the scientists use porous molecular frameworks (MOFs) that are assembled in layers on solid substrates using a specifically developed method. The results have now been published in the renowned journal “Angewandte Chemie”.

Enantiomers are pairs of molecules built in a mirror-inverted manner. They differ from each other like a left and a right glove. This property of the molecules that is referred to as chirality is of particular relevance to biosciences and pharmaceutics. “While many, especially smaller, molecules like carbon dioxide or methane are not chiral, many biologically relevant molecules, such as tartaric acid have this property,” explains Professor Christof Wöll, Head of the KIT Institute of Functional Interfaces (IFG). For many pharmaceutical agents, only one of both enantiomers is desired for the effective molecules being able to dock to certain structures in the body.

In contrast to conventional methods, the process developed by the team of researchers directed by Professor Wöll, Professor Roland Fischer from the Chair for Inorganic Chemistry II of RUB, and Humboldt scholar Bo Liu (KIT and RUB) allows for a more rapid and, hence, cheaper separation of enantiomers. It is based on novel molecular frameworks (MOFs) that can be grown on solid substrates. These porous coatings that are also referred to as SURMOFs are produced by an epitaxy process specifically developed by the researchers. Instead of heating the solution mixtures produced from the initial substances, modified substrates are immersed alternately in the solutions of the initial substances. “In this way, the molecular layers are assembled one after the other comparable to a rack system,” explains Roland Fischer. These molecular rack systems anchored to the surfaces can be functionalized for various applications.

The enantiomers are separated by chiral organic molecules that are the linkers or struts of the rack systems. Thanks to their enantiopure structure, these coatings retain one of both enantiomers. In their contribution that was also selected for the title photo of the journal “Angewandte Chemie”, the scientists describe the separation of the enantiomer molecules (2R, 5R)-2,5-hexanediol (R-HDO) and (2S, 5S)-2,5-hexanediol (S-HDO). Future work will be aimed at increasing the mesh width of the porous structures in order to test the method for larger molecules used as pharmaceuticals. “Pharmaceutical substances are two or more nanometers in size and, hence, larger than hexanediol. The development of surface-attached networks with such large structures is a big challenge,” explains Professor Wöll.

It is a particular advantage of SURMOFs that the efficiency of enantiomer separation can be measured rapidly and precisely. With the help of quartz crystal microbalances, it was demonstrated that surface-anchored molecular framework structures reach excellent separation efficiencies already. “The SURMOFs as a new material have an enormous potential for use in pharmaceutical industry,” explains Professor Jürgen Hubbuch, holder of the Chair for Molecular Separation Engineering (MAB) and Spokesman of the KIT Competence Field of Biotechnology.