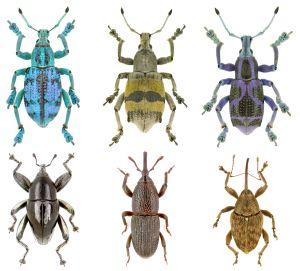 Weevils are widely distributed and rich in species. The different, partly exquisitely colored species all have a thorn-shaped extension of their head. (Source: Karlsruhe State Museum of Natural History)

A musculoskeletal system so far unknown in the animal world was recently discovered in weevils. The hip of Trigonopterus oblongus does not consist of the usual hinges, but of joints based on a screw-and-nut system. This first biological screw thread is about half a millimeter in size and was studied in detail using synchrotron radiation. The discovery is reported by the current issue of the Science magazine.   (DOI:10.1126/science.1204245)

“Such a construction for animal leg movement is quite unusual, as large areas of skeletal parts move on top of each other. Supply of the leg takes place via a very small opening in the center of the screw,” Thomas van de Kamp from Karlsruhe Institute of Technology says. In nature, hips and shoulders usually are based on ball-and-socket systems or hinges that can be operated more easily by organisms. Screws and nuts are known from engineering and used for the fixed connection of components. “Now, we found that nature was first in inventing screws and nuts, because weevils have been using this construction for about 100 million years already,” Alexander Riedel from the Karlsruhe State Museum of Natural History says. This museum supplied the weevil samples studied. The detailed three-dimensional images of the joints were made at the national ANKA synchrotron radiation source of Karlsruhe Institute of Technology. 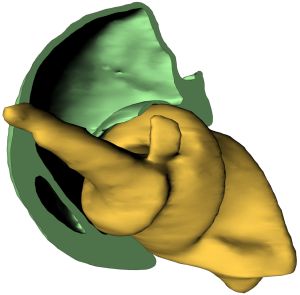 Both parts of the weevil’s hip joint fit like screw and nut. This increases the mobility of the leg. (Source: KIT)

As a rule, weevils are clumsier than many other beetles, e.g. cara-bidae. Transformation of a hinge joint into a screw joint, however, allowed them to move their legs further down, which made them better climbers. The Trigonopterus oblongus weevil analyzed here lives on twigs and foliage in the jungle of Papua New Guinea. For feeding, the thorn is pushed into the plant tissue, while the hind legs provide strong foothold. Presumably, the screw joint also is advan-tageous in this respect.

“Meanwhile, we have also studied other weevil species and always found screw joints,” explain Riedel and van de Kamp. “Obviously, this joint exists in all weevils, of which more than 50,000 species exist worldwide.“ In this case, the researchers would have identified the screw joint to be a so far unknown basic feature of the weevil family. The best known species in Germany are curculio nucum and curculio glandium as well as the corn weevil, a grain pest.

The three-dimensional image reconstructions of the joint of Trig-onopterus oblongus of half a millimeter in size were made by means of the newly installed microtomograph of the ANKA synchrotron radiation source. “It extends the existing ensemble of synchrotron imaging techniques for wide application in life sciences,” says Tilo Baumbach, Head of the ANKA synchrotron radiation source. “External users can now apply modern systems, from long-wave terahertz radiation to the highly brilliant X-radiation used in this case.”

The studies of the Trigonopterus species are funded by the DFG.