KIT Takes over the Archive of Works by Frei Otto 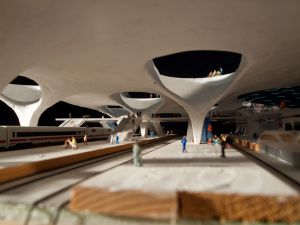 Light eyes for Stuttgart 21: One of the models from the archive of Frei Otto. (Photo: saai)

Frei Otto is one of the most renowned architects of the 20th century. Among his best-known constructions are the roofs in the Olympic Park in Munich. Last, he designed the light eyes for the Stuttgart 21 project. The archive of works by Frei Otto with more than 400 models is now handed over by the 86-year-old architect to saai I Archive for Architecture and Engineering in Southwest Germany at KIT. During a press conference on Wednesday, July 06, 11 hrs, at the Karlsruher Staatliche Münze (Stephanienstrasse 28a), saai will present this collection.

Apart from Frei Otto, Professor Johann Josef Böker, Head of saai, Dr. Joachim Kleinmanns, scientist at saai, and the architect and scientist Professor Roland Ostertag, Stuttgart, will answer the questions asked by the press. In addition, a guided tour through the archive of works by Frei Otto will be offered. Representatives of the media are cordially invited. Kindly register using the form enclosed.

Frei Otto is architect, engineer, constructor, inventor, and scientist. In the past century, he influenced modern architecture and engineering. As early as in 1970 did he draw public attention to aspects of resources efficiency, planning for saving energy, and climate and environmental protection during construction. Frei Otto extensively worked on these topics, for instance, by developing and inventing viable and energy-efficient constructions.

In February this year already were 429 models of architecture transferred from the artist’s workshop at Warmbronn to KIT. Other materials, such as sketches and plans, files, photos, and specimen copies will follow. “As soon as these documents will be in Karlsruhe, we will start with the indexing of the material, which is the prerequisite for its use,” says the Head of saai, Professor Johann Josef Böker.

KIT has purchased the archive of works with financial support by the State of Baden-Württemberg and transferred it to saai. Numerous, also international institutions, such as the Centre Pompidou, Paris, struggled to get this collection. Thanks to the architect and scientist Professor Roland Ostertag, Stuttgart, the collection now stays in Baden-Württemberg at a university. “This is an investment with perspective, in the future, in research, in education and training of future generations,” says Ostertag. The decision in favor of the saai was made due to its convincing concept: While most competitors wanted to present some models of high value in exhibitions, saai intends to use the works as a basis of research. “For this purpose, also the files and plans will be of crucial importance,” says Dr. Joachim Kleinmanns, scientist at saai. “This inventory allows to reproduce the planning process in all individual steps.” At the Staatliche Münze Karlsruhe (state’s mint), the materials will be accessible for scientific, didactic, and artistic purposes. Access of the public will require advance reservation.

After an indexing phase in the next years, several research projects of saai and external researchers will then be dedicated to partial aspects of the works by Frei Otto. In addition, the archive will be permanently available to the institutions of KIT and other establishments as teaching material. saai understands itself as coordination partner for research and teaching activities relating to the works of Frei Otto. It is one of the most significant and largest archives of architecture in Germany. Here, inventories of more than 200 architects and engineers with more than 1 million documents are stored.

About Frei Otto
Frei Otto was born in 1925 at Siegmar, Saxony, and studied architecture at the Technical University of Berlin. In 1952, the started his career as free-lance architect. In 1958, he founded the “Entwicklungsstätte für den Leichtbau” (workshop for the development of lightweight construction). In 1964, he was appointed head of the Institute for Lightweight Load-bearing Surface Structures of the Technical University of Stuttgart. In Stuttgart, he taught as an ordinary professor from 1976 to 1991. There, he also established the collaborative research centers on “Tensioned Load-bearing Surface Constructions” (from 1971) and “Natural Constructions” (from 1984). Among the best-known constructions are the German pavilion at the World Exposition in Montreal in 1976 (with Rolf Gutbrod), the roofings of the Olympic Park in Munich (with Behnisch& Partner, 1968 – 72), the sports hall of the King Abdul Aziz University in Jeddah (with Rolf Gutbrod, 1976 – 81), and the diplomatic club at Riyadh (with the office Omrania, Riyadh; 1980 – 86), Saudi Arabia. Last, Frei Otto was successful with his design for Stuttgart 21 (with Ingenhoven, Overdiek, and Partners).