The July Issue of Nature Materials Describes the Function of an Innovative Tiny Component Developed by Researchers of KIT’s Institute of Nanotechnology Together with a Team of European Scientists. 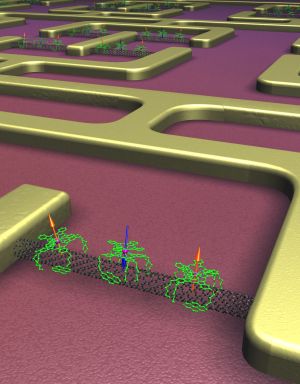 Magnetic storage media such as hard drives have revolutionized the handling of information: We are used to dealing with huge quantities of magnetically stored data while relying on highly sensitive electronic components. And hope to further increase data capacities through ever smaller components. Together with experts from Grenoble and Strasbourg, researchers of KIT’s Institute of Nanotechnology (INT) have developed a nano-component based on a mechanism observed in nature.

What if the very tininess of a component prevented one from designing the necessary tools for its manufacture? One possibility could be to “teach” the individual parts to self-assemble into the desired product. For fabrication of an electronic nano-device, a team of INT researchers headed by Mario Ruben adopted a trick from nature: Synthetic adhesives were applied to magnetic molecules in such a way that the latter docked on to the proper positions on a nanotube without any intervention. In nature, green leaves grow through a similar self-organizing process without any impetus from subordinate mechanisms. The adoption of such principles to the manufacture of electronic components is a paradigm shift, a novelty.

The nano-switch was developed by a European team of scientists from Centre National de la Recherche Scientifique (CNRS) in Grenoble, Institut de Physique et Chimie des Matériaux at the University of Strasbourg, and KIT’s INT. It is one of the invention’s particular features that, unlike the conventional electronic components, the new component does not consist of materials such as metals, alloys or oxides but entirely of soft materials such as carbon nanotubes and molecules.

Terbium, the only magnetic metal atom that is used in the device, is embedded in organic material. Terbium reacts highly sensitively to external magnetic fields. Information as to how this atom aligns along such magnetic fields is efficiently passed on to the current flowing through the nanotube. The Grenoble CNRS research group headed by Dr. Wolfgang Wernsdorfer succeeded in electrically reading out the magnetism in the environment of the nano-component. The demonstrated possibility of addressing electrically single magnetic molecules opens a completely new world to spintronics, where memory, logic and possibly quantum logic may be integrated.

The function of the spintronic nano-device is described in the July issue of Nature Materials (DOI number: 10.1038/Nmat3050)for low temperatures of approximately one degree Kelvin, which is -272 degrees Celsius. Efforts are taken by the team of researchers to further increase the component’s working temperature in the near future.