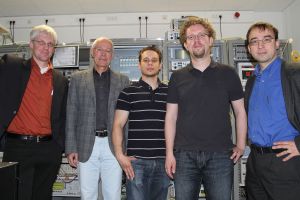 Scientists of Karlsruhe Institute of Technology (KIT) have succeeded in encoding data at a rate of 26 terabits per second on a single laser beam, transmitting them over a distance of 50 km, and decoding them successfully. This is the largest data volume ever transported on a laser beam. The process developed by KIT allows to transmit the contents of 700 DVDs in one second only. The renowned journal “Nature Photonics” reports about this success in its latest issue (DOI: 10.1038/NPHOTON.2011.74).

With this experiment, the KIT scientists in the team of Professor Jürg Leuthold beat their own record in high-speed data transmission of 2010, when they exceeded the magic limit of 10 terabits per second, i.e. a data rate of 10,000 billion bits per second. This success of the group is due to a new data decoding process. The opto-electric decoding method is based on initially purely optical calculation at highest data rates in order to break down the high data rate to smaller bit rates that can then be processed electrically. The initially optical reduction of the bit rates is required, as no electronic processing methods are available for a data rate of 26 terabits per second.

The team of Leuthold applies the so-called orthogonal frequency division multiplexing (OFDM) for record data encoding. For many years, this process has been used successfully in mobile communications. It is based on mathematical routines (Fast Fourier Transformation). “The challenge was to increase the process speed not only by a factor of 1000, but by a factor of nearly a million for data processing at 26 terabits per second,” explains Leuthold who is heading the Institutes of Photonics and Quantum Electronics and Microstructure Technology at KIT. “The decisive innovative idea was optical implementation of the mathematical routine.” Calculation in the optical range turned out to be not only extremely fast, but also highly energy-efficient, because energy is required for the laser and a few process steps only. 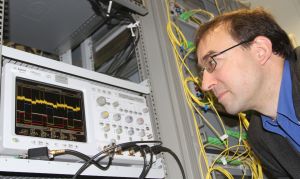 “Our result shows that physical limits are not yet exceeded even at extremely high data rates”, Leuthold says while having in mind the constantly growing data volume on the internet. In the opinion of Leuthold, transmission of 26 terabits per second confirms that even high data rates can be handled today, while energy consumption is minimized.

“A few years ago, data rates of 26 terabits per second were deemed utopian even for systems with many lasers.” Leuthold adds, “and there would not have been any applications. With 26 terabits per second, it would have been possible to transmit up to 400 million telephone calls at the same time. Nobody needed this at that time. Today, the situation is different.” Video transmissions predominate on the internet and require extremely high bit rates. The need is growing constantly. In communication networks, first lines with channel data rates of 100 gigabits per second (corresponding to 0.1 terabit per second) have already been taken into operation. Research now concentrates on developing systems for transmission lines in the range of 400 Gigabits/s to 1 Tbit/s. Hence, the Karlsruhe invention is ahead of the ongoing development. Companies and scientists from all over Europe were involved in the experimental implementation of ultra-rapid data transmission at KIT. Among them were members of the staff of Agilent and Micram Deutschland, Time-Bandwidth Switzerland, Finisar Israel, and the University of Southampton in Great Britain.

By entering the DOI number, an abstract may be obtained at: http://dx.doi.org/