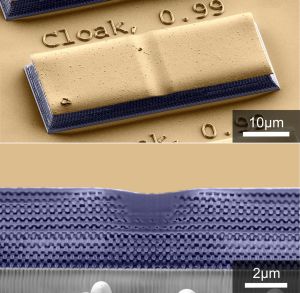 “Seeing something invisible with your own eyes is an exciting experience,” say Joachim Fischer and Tolga Ergin. For about one year, both physicists and members of the team of Professor Martin Wegener at KIT’s Center for Functional Nanostructures (CFN) have worked on refining the structure of the Karlsruhe invisibility cloak to such an extent that it is also effective in the visible spectral range.

In invisibility cloaks, light waves are guided by the material such that they leave the invisibility cloak again as if they had never been in contact with the object to be disguised. Consequently, the object is invisible to the observer. The exotic optical properties of the camouflaging material are calculated using complex mathematical tools similar to Einstein’s theory of relativity.

These properties result from a special  structuring of the material. It has to be smaller than the wavelength of the light that is to be deflected. For example, the relatively large radio or radar waves require a material “that can be produced using nail scissors,” says Wegener. At wavelengths visible to the human eye, materials have to be structured in the nanometer range.

The minute invisibility cloak produced by Fischer and Ergin is smaller than the diameter of a human hair. It makes the curvature of a metal mirror appear flat, as a result of which an object hidden underneath becomes invisible. The metamaterial placed on top of this curvature looks like a stack of wood, but consists of plastic and air. These “logs” have precisely defined thicknesses in the range of 100 nm. Light waves that are normally deflected by the curvature are influenced and guided by these logs such that the reflected light corresponds to that of a flat mirror.

“If we would succeed again in halving the log distance of the invisibility cloak, we would obtain cloaking for the complete visible light spectrum,” says Fischer.

Last year, the Wegener team presented the first 3D invisibility cloak in the renowned journal Science. Until that time, the only invisibility cloaks existed in waveguides and were of practically two-dimensional character. When looking onto the structure from the third dimension, however, the effect disappeared. By means of an accordingly filigree  structuring, the Karlsruhe invisibility cloak could be produced for wavelengths from 1500 to 2600 nm. This wavelength range is not visible to the human eye, but plays an important role in telecommunications. The breakthrough was based on the use of the direct laser writing method (DLS) developed by CFN. With the help of this method, it is possible to produce minute 3D structures with optical properties that do not exist in nature, so-called metamaterials.

In the past year, the KIT scientists continued to improve the already extremely fine direct laser writing method. For this purpose, they used methods that have significantly increased the resolution in microscopy. With this tool, they then succeeded in refining the metamaterial by a factor of two and in producing the first 3D invisibility cloak for non-polarized visible light in the range of 700 nm. This corresponds to the red color.

“The invisibility cloak now developed is an attractive object demonstrating the fantastic possibilities of the rather new field of transformation optics and metamaterials. The design options that opened up during the last years had not been deemed possible before,” emphasizes Ergin. “We expect dramatic improvements of light-based technologies, such as lenses, solar cells, microscopes, objectives, chip production, and data communication.”

The Way towards the Karlsruhe Invisibility Cloak
The “small improvement” of the Karlsruhe metamaterial with a high effect results from a series of development steps that appeared impossible a few years ago. Until the early 21st century, it was deemed infeasible to develop a material, by means of which light can be manipulated such that the material acts like an invisibility cloak. In 2006, the fundamentals of an invisibility cloak were described for the first time by the theory of transformation optics.

Direct Laser Writing (DLS)
Direct laser writing is a photo-lithographic method to produce arbitrary three-dimensional microstructures. In an optical microscope setup, the photoresist is moved in all three dimensions by a computer-controlled, piezo-driven table. It is exposed to a strongly focused laser beam through the objective lens. In a small, confined area, the solubility of the photoresist is changed by the energy of the beam. Depending on the type of photoresist, the irradiated or non-irradiated regions are washed out in the development bath. Conventional direct laser writing can be used to produce structures of 100 nm width and 300 nm height. Using the direct laser writing method optimized by the CFN, the height can be reduced to 150 nm, although conventional direct laser writing operates at the limit of physical resolution already.

Metamaterials
Metamaterials are artificially produced structures that behave like a homogeneous material and possess properties that do not exist in nature. Usually, they consist of regularly arranged elements of identical shape that interact with electromagnetic waves, although they are far larger than atoms in a crystal. Nanotechnologically produced metamate-rials consist of units small enough to influence electromagnetic waves with wavelengths from the visible to the infrared range.

DFG Center for Functional Nanostructures (CFN)
The DFG Center for Functional Nanostructures (CFN) is dedicated to an important area of nanotechnology, functional nanostructures. Excellent interdisciplinary and international research activities are aimed at representing nanostructures with new technical functions and making the first step from fundamental research towards application. Presently, more than 250 scientists and engineers are cooperating in more than 80 partial projects of CFN. Activities focus on Nano-Photonics, Nano-Electronics, Molecular-Nanostructures, Nano-Biology, and Nano-Energy. www.cfn.kit.edu