The 15th Karlsruhe Dialogues Focus on the Internet – Presentations, Discussions, and Cultural Program from February 11 to 13, 2011 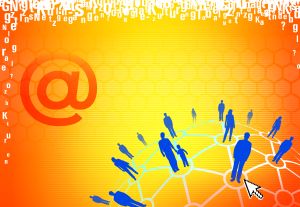 The internet and its impacts are in the focus of the 15th Karlsruhe Dialogues. (Photo: Specktakulär)

Current discussions relating to WikiLeaks, cyber security, and social networks are examples of how important the internet is to society, politics, and culture. The 15th Karlsruhe Dialogues Talks entitled “Caught in the Net? Global Google Cultures” will focus on the positive and negative aspects of this young mass medium. From February 11 to 13, 2011, ZAK I Center for Applied Cultural Science and Studium Generale at KIT will provide presentations, discussions, and cultural events on this topic. The interested public is cordially invited to attend, admission will be free in most cases.

The mass medium internet is just 15 years old. Yet, it has changed society in a way comparable to the invention of printing or the discovery of electricity. E-mail, social media, online shopping or online banking: Web users are not only “online”, but actively design their everyday life on the internet. “Life without the internet can hardly be imagined,” says Professor Caroline Y. Robertson-von Trotha, Director of ZAK. “The web revolutionizes our society. Its impacts on culture, politics, and economy are enormous, implications are not foreseeable. On both the local and global level, new cultural daily routines develop in virtual space, which gives rise to a number of chances, but also requires adaptation in offline life.”

The 15th Karlsruhe Dialogues will highlight the internet and its sociological, cultural, technical, and political components from various perspectives. This event with its international guests is unique in Germany. It will focus on the impact of the web on individuals and society. Furthermore, current discussions relating to WikiLeaks, cyber security, and social networks will be addressed. The information flood, use of the internet by terrorists, or internet censorship in China will be other subjects of the symposium that is supported by the Foundation for Art and Culture of Sparda-Bank Baden-Wuerttemberg eG and the city of Karlsruhe.


Program of the 15th Karlsruhe Dialogues:

Daniel Domscheit-Berg, former spokesman of WikiLeaks, and Andrew Keen, author of the book “Die Stunde der Stümper“ (The Hour of the Botchers), will concentrate on the subject “Radical Transparency – Friend or Enemy of Democracy?” Their presentations will mark the beginning of the Karlsruhe Talks on Friday, February 11, 2011, 19.30 hrs, at the Karlsruher SpardaEvent-Center, Baumeisterstraße 21.

The symposium on Saturday, February 12, will start at 9.30 hrs at the Industrie- und Handelskammer Karlsruhe, Saal Baden, Lammstraße 13-17. There, Professor David Nicholas from the University of London will talk about the Google generation. A critical Google search is demanded by Professor Geert Lovink, founder and director of the Institute for Network Cultures of the University of Amsterdam. The democratic potential of the internet in Iran and China will be highlighted by the Irani Kuros Yalpani and Professor Joseph Cheng from Hong Kong. David Rowan, editor of the magazine WIRED, will speak about the mass creativity of internet society. In addition, internet crime will be on the agenda as will the impact of social media on society.

The topics covered on the previous days will be taken up again by the podium discussions on Sunday, February 13. In the morning, a discussion round with international participants will ask for the future of the web society under the title “Internet quo vadis?” The discussion will start at 11.00 hrs at the SpardaEvent-Center. Under the heading “The Internet between Web Freedom, WikiLeaks, and Cyber War”, the podium discussion at 14.30 hrs will focus on the power potential of the internet and critically analyze the consequences of absolute transparency. Due to recent events, the Tunisian internet activist Sami Ben Gharbia will report about the role of WikiLeaks in the Tunisian revolution. Conference languages will be German and English. Simultaneous interpretation will be provided.

Cultural events will accompany the analytical discourse: Among them will be long film night with a number of documentaries and the film “8th Wonderland” on Saturday, February 12, 20 hrs in cooperation with ARTE and ZKM | Center for Art and Media Technology. On Sunday, February 13, the INSEL of the Baden State Theater Karlsruhe will present at theatrical reading of the cyber drama “Dunkles Spiel oder Geschichten für Jungs” by Carlos Murillo.

The opening event on Friday, February 11, is booked out! However, it is available live via the internet at www.zak.kit.edu.

Further information and the complete program can be found at www.zak.kit.edu.