Green Computing at KIT: Computer Scientists Bank on the Use of Low-energy Processors 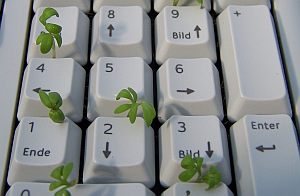 Scientists from KIT and Goethe University of Frankfurt developed a system that substantially reduces the energy consumption for processing huge amounts of data. Thus, they established a new world record in an international contest for the efficient sorting of data. Compared to the former record holders from the world-renowned Stanford University, they improved the power efficiency by a factor of three to four.

The team around Professor Peter Sanders from KIT and Professor Ulrich Meyer from Goethe University enabled the record by using seemingly unconventional hardware: instead of server processors with a high power consumption, the computer scientists took processors of the type “Intel Atom”. These are microprocessors originally developed for net books.

Their lower processing power compared to server systems was compensated by the usage of highly efficient algorithms. Instead of hard drives, which consume a lot of power for the mechanics, the team employed “Solid-state Disks (SSD)”, which are clearly faster and, at the same time, more power-economical.

The record gives rise to the question whether information technology’s increasing hunger for energy could be reduced strongly. “In the long run, many small, power-efficient, and cooperating systems will replace the heavyweight ones used so far", explains Peter Sanders.

Starting point for the team’s research project was one of the key problems in computer science, namely, the sorting of data. Computers connected via the internet generate constantly growing amounts of data. In order to analyze the data, they have to be sorted according to a specific criterion first. Hence, the efficient sorting of data is of central interest for search engines and databases – and therefore an important research topic in both theoretical and practical computer science.

In the three categories of the competition, the researchers had to sort data amounts of 10 GB, 100 GB, and 1 TB, respectively, consisting of data sets of 100 bytes each. Even in the largest category of 1 terabyte, which corresponds to a stack of paper of 10 km height, the new record holders only spent 0.2 kWh. This is about the energy needed to boil 2 liters of water.

Supervised by Sanders and Meyer, the Ph.D. candidates Johannes Singler (KIT) and Andreas Beckmann (Goethe University) developed the energy-saving system. The research groups of both universities are internationally noted for their work on the design and implementation of efficient algorithms for processing large data quantities. The world records are listed as “JouleSort” entries in the “Sort Benchmark”, which has been established for decades and published by experts from industry, e. g. Hewlett-Packard and Microsoft.