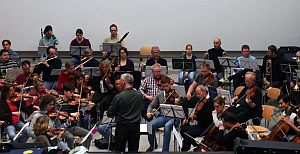 The power of music: It captured the new KIT Philharmonic Orchestra on an intensive rehearsal weekend at the end of February.

Music unites - this certainty is the basis of the newly formed KIT Philharmonic Orchestra with about 80 instrumentalists under the direction of Nikolaus Indlekofer. Members of all classical ensembles of Campus North and Campus South unite to an orchestra once per year in order to perform big symphonic compositions.

In this way, the existing orchestras continue their own musical traditions, give new impulses to the merger of the Research Center and University of Karlsruhe into KIT by joint musical experience and concert, and contribute to the growth of a KIT culture by intensive rehearsals, commitment, and the enthusiasm of the instrumentalists. “Musical work at Karlsruhe Institute of Technology and previously at the University of Karlsruhe has always inspired me. The great enthusiasm of the members of the ensembles is the germ cell of always new highlights,” says KIT musical director Indlekofer, “and I hope that the fire of the hearts will also be heard in our KIT Philharmonic Orchestra project.”

The concert will be opened by the bewitching tone poem in fiery orchestra colors and mystical, spooky sounds “Night on a Bald Mountain” of the Russian composer Modest Petrowitsch Mussorgski, which is one of the best known examples of Russian symphonic poems of the 19th century.

Then, Robert Schumann’s “Concerto for Violoncello and Orchestra”, a-minor, op. 129, of 1850 will be performed, which is characterized by a touching leitmotif that extends over all three movements. The virtuosic, often wild solo will be played by the just twenty-year-old cellist Benedict Klöckner, who has been studying at the Karlsruhe Conservatory since 2003 and won a number of national and international awards, such as the award “for the most promising young talent” of the International Johannes Brahms Competition in Pörtschach.

The concert will be concluded by Antonín Dvořák’s popular “Symphony from the New World”. It links the worlds of sound of the composer’s Bohemian home with those of the American continent he loved and came to know when he stayed for two and half years at the New York Conservatory as a teacher of composition. Characteristic features are the Bohemian dance in the trio of the scherzo, reminiscences of Indian melodies, spiritual rhythms, and the musical implementation of a trip with a steam locomotive into the Wild West.

The entrance fee is 10.00 €, the reduced price is 5.00 €. Tickets are available at Musikhaus Schlaile and the Stadtinformation.