University’s Chancellor To Be Seen Off

Ceremonial Act at the Audimax of Universität Karlsruhe with the State Minister of Science, Peter Frankenberg 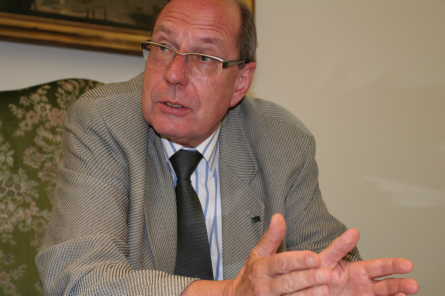 Starting something new: Dietmar Ertmann is commissioned to found the first
technical university at Lahore.
(Photo by: Universität Karlsruhe)

After eight years as Chancellor, Dr. Dietmar Ertmann will leave the Universität Karlsruhe in order to establish the first technical university modeled on the German structure at Lahore, Pakistan. The Universität Karlsruhe and Karlsruhe Institute of Technology will thank him in a ceremonial act taking place on Wednesday, October 22, 17:30 hrs, at the Audimax (building no. 30.95, Straße am Forum 1).The Baden-Württemberg Minister of Science, Research, and Art, Professor Peter Frankenberg, will come personally to see Ertmann off.

Since October 01, 2000, Ertmann has been Chancellor of the Universität Karlsruhe. His leave will also mark the end of an era at the Fridericiana. Due to the structural changes associated with the establishment of the KIT and the planned KIT Act, his position will cease to exist in this form.

“Dr. Ertmann has left his marks on the Universität Karlsruhe in the true sense of the word”, underlines President Professor Horst Hippler, who will appreciate during the ceremonial event the impacts of Ertmann’s chancellorship on structures inside and outside of the university and the enormous progress achieved.

Ertmann is associated with the Universität Karlsruhe by more than his period of chancellorship. From 1981 to 1987, he was corporate counsel of the Fridericiana, head of the Central Department of Academic Matters, and personal aide of the President. From 1987 to 1990, he assumed office of the Deputy Chancellor and headed the Central Department for Personnel and Budgetary Matters. In 1990, Ertmann moved to the University of Mannheim, where he had been elected Chancellor, at the age of 40 the youngest in Germany at that time.

The decision to actively participate in the establishment of a technical university in Pakistan reflects Ertmann’s disposition: “This is a great challenge”, says Ertmann. “Pakistan has an enormous backlog demand in the education sector – that is why this task is so meaningful.” Born in Ulm, Ertmann studied and worked in Great Britain, Africa, and in France, where he passed among others the renowned Ecole Nationale d´Administration (ENA).

Journalists are cordially invited to the ceremonial act.

Address
Chancellor of the University of Tübingen and
Spokesman of the Baden-Württemberg Chancellors
Dr. Andreas Rothfuß

Edvard Grieg (1843-1907)
From the suite No. 1 of “Peer Gynt“
Morning (Alegretto pastorale)
In the hall of the mountain king (Alla marcia e molto marcato)
Collegium Musicum of the Universität Karlsruhe (TH)

Reception in the entrance hall of the Audimax.